HOW DID LIFE COME INTO EXISTENCE:- 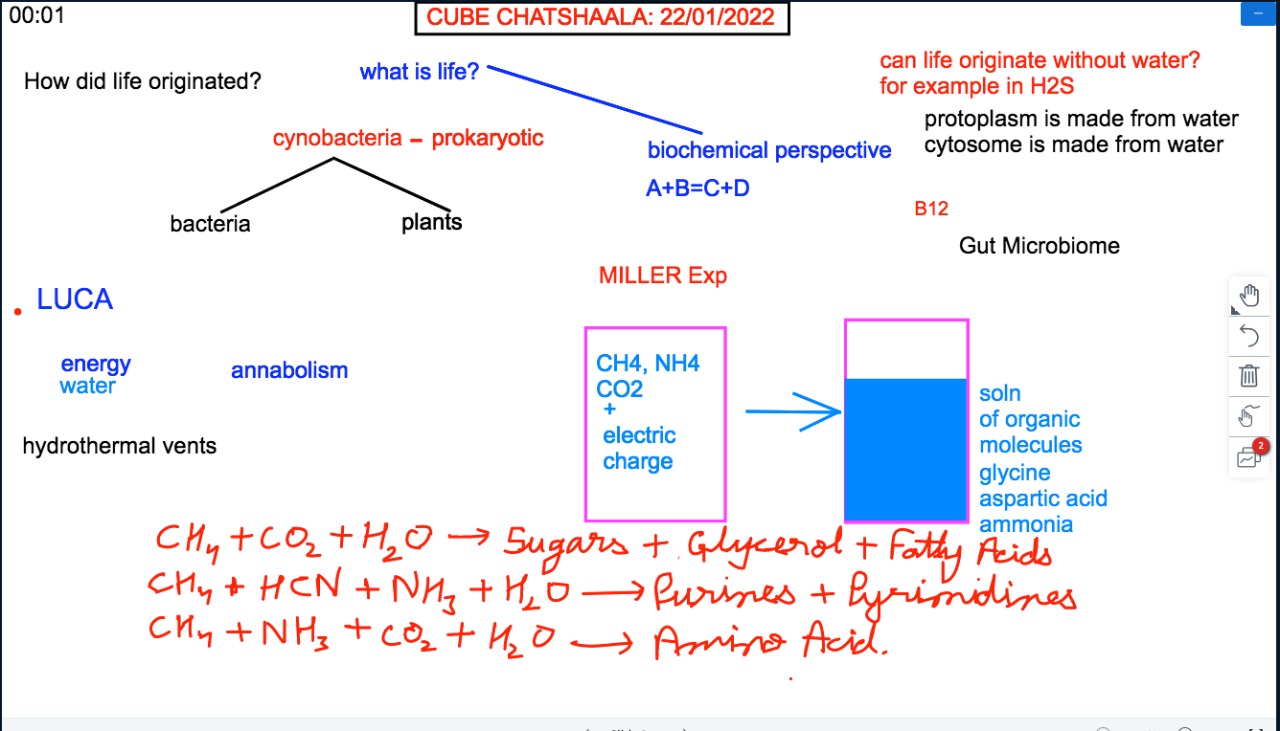 We Started the discussion with the question of how life originated on the earth?
When we are studying Molecular basis of life this question is very common and intersting!

Along with Chitralekha ma’am from DSC college, Delhi. Soumyadip and Batul ma’am from Kolkata, Rati from AND college, Delhi(currently in Andaman and Nicobar), and Anindita from K.J.Somaiya college discussed about the requirements for like to form?

So chemicals, a liquid solvent, and energy or heat came into the picture. These kinds of conditions are only there in Ocean near hydrothermal vents. This statement is also supported by the fact that at some 4 billion years ago the atmosphere was not hospitable and Sun’s UV radiation would not allow life to emerge and be diverse as we see it today.

We also discussed Miller’s experiment. The Miller–Urey experiment (or Miller experiment) was a chemical experiment that simulated the conditions thought at the time (1952) to be present on the early Earth and tested the chemical origin of life under those conditions. After Miller’s death in 2007, scientists examining sealed vials preserved from the original experiments were able to show that there were actually well over 20 different amino acids produced in Miller’s original experiments.

Anindita from k.j.somaiya College, Mumbai suggested that maybe the primary life forms were cyanobacteria. And as we were discussing *we came to know that cynobacteria came a bit later like that but it was between plants and bacteria

Through this we discussed other theories of the origin of life on earth that life could have been come from some other part of space through asteroids or something?

Scientists are studying microbes in space by taking samples from the earth.

We discussed are there any place on earth where microbes or any life form is not present? Are there any totally sterile zones? We also discussed a little about Magnetotactic bacteria (or MTB) are a polyphyletic group of bacteria that orient themselves along the magnetic field lines of Earth’s magnetic field.

FROM INITIATION OF LIFE BY RNA TO IMMUNOLOGY 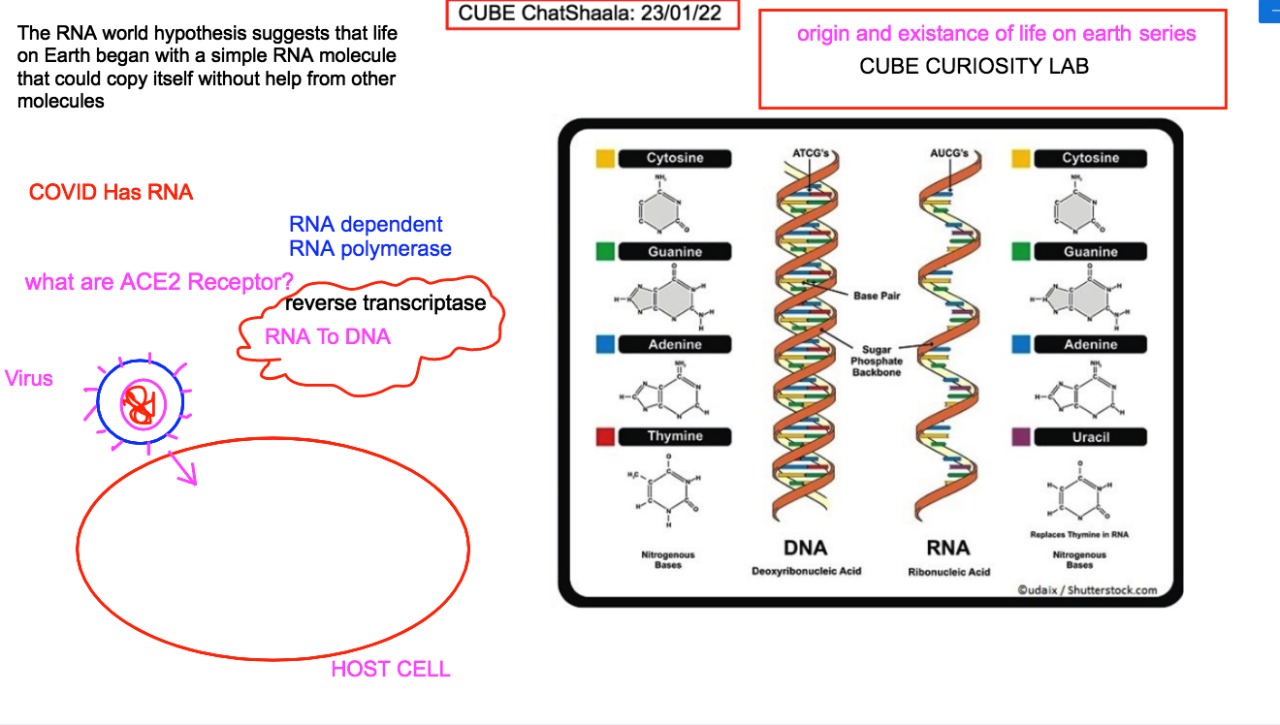 We continued the discussion on the origin of life or how did life come into existence. While discussing we pondered upon the RNA world Hypothesis, which suggests the life of the earth began with RNA molecules that could copy itself without any help from other molecules and there are still such examples available in nature who jas RNA as their genetic material for example coronavirus. 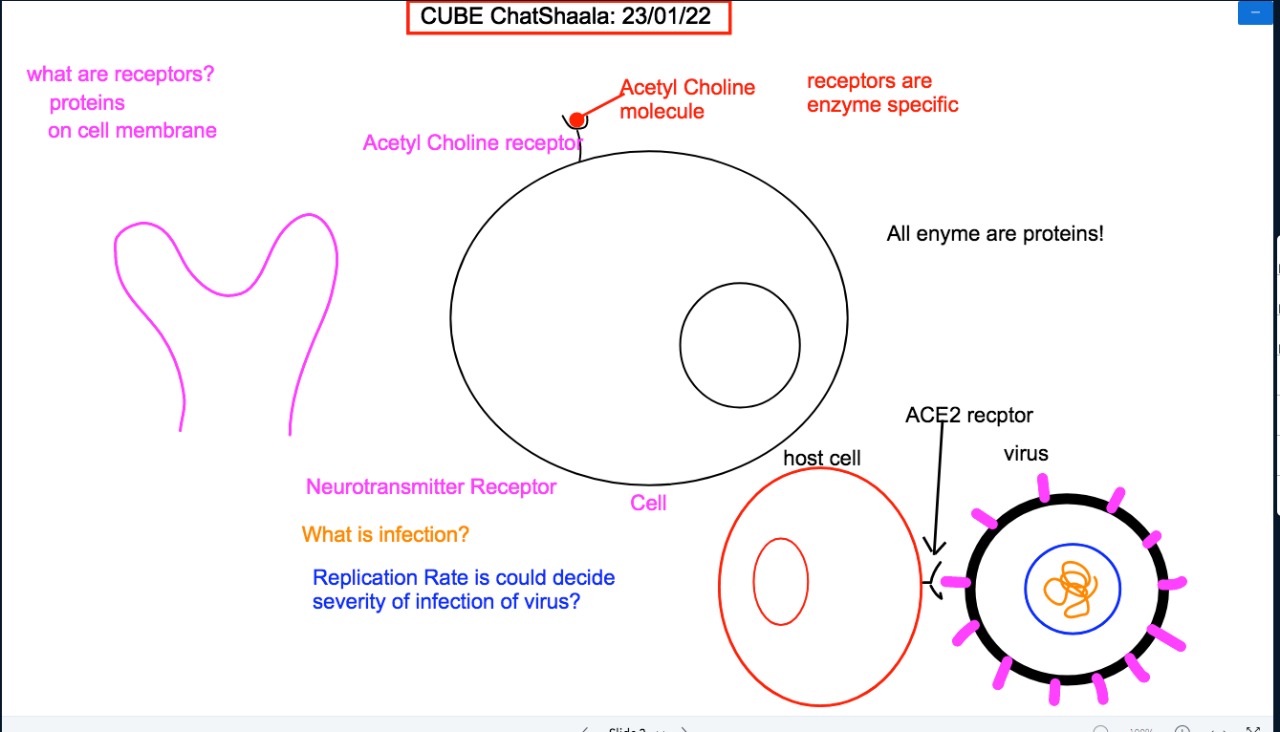 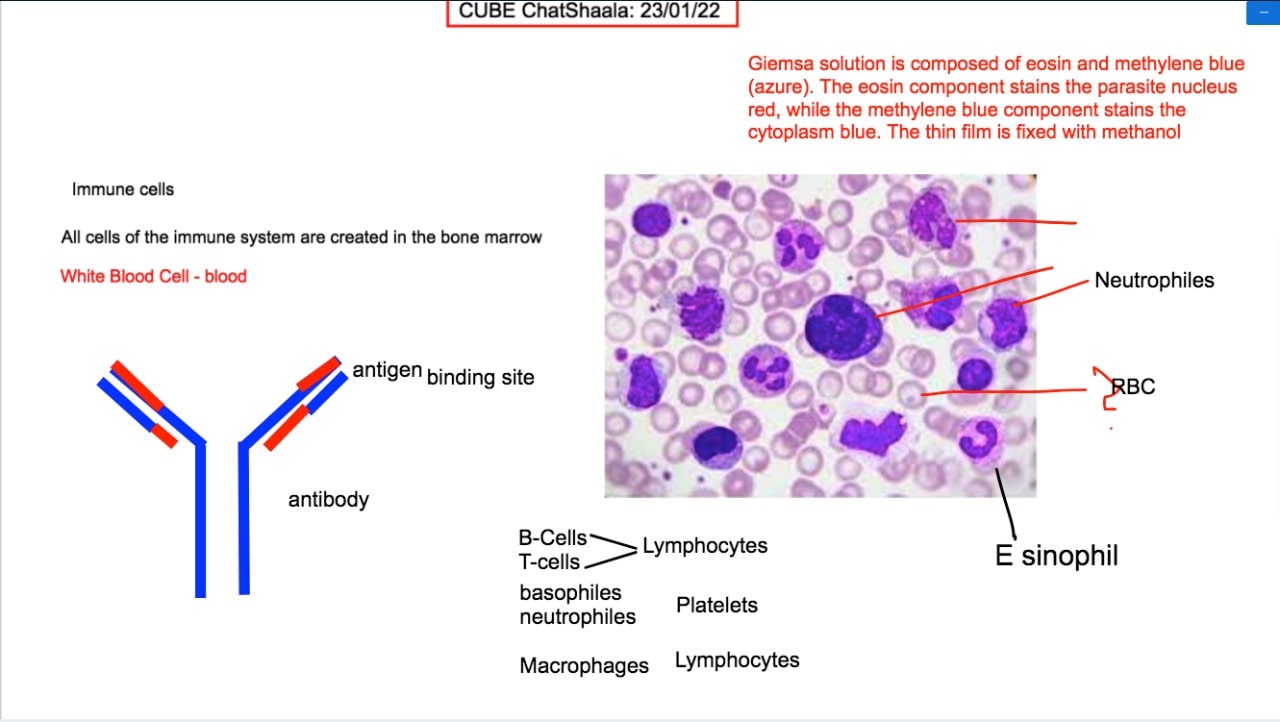 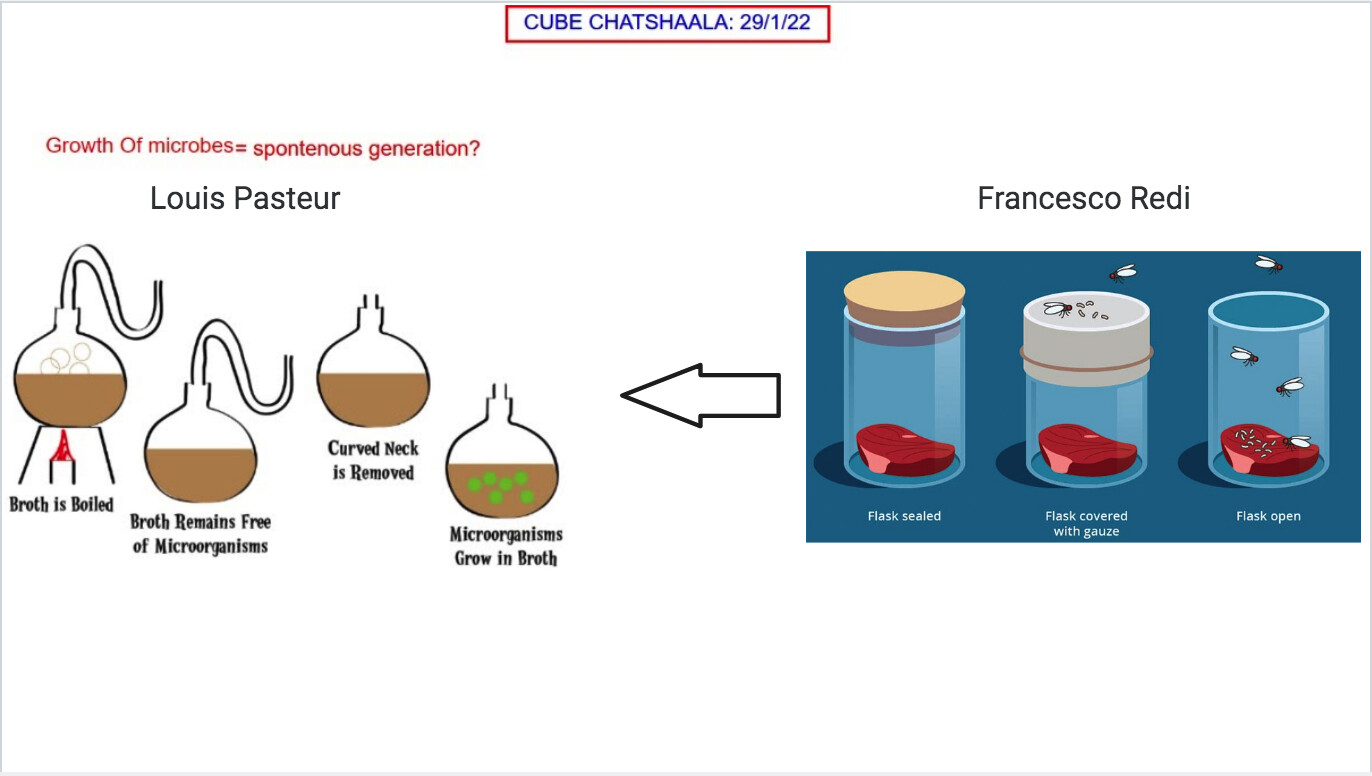 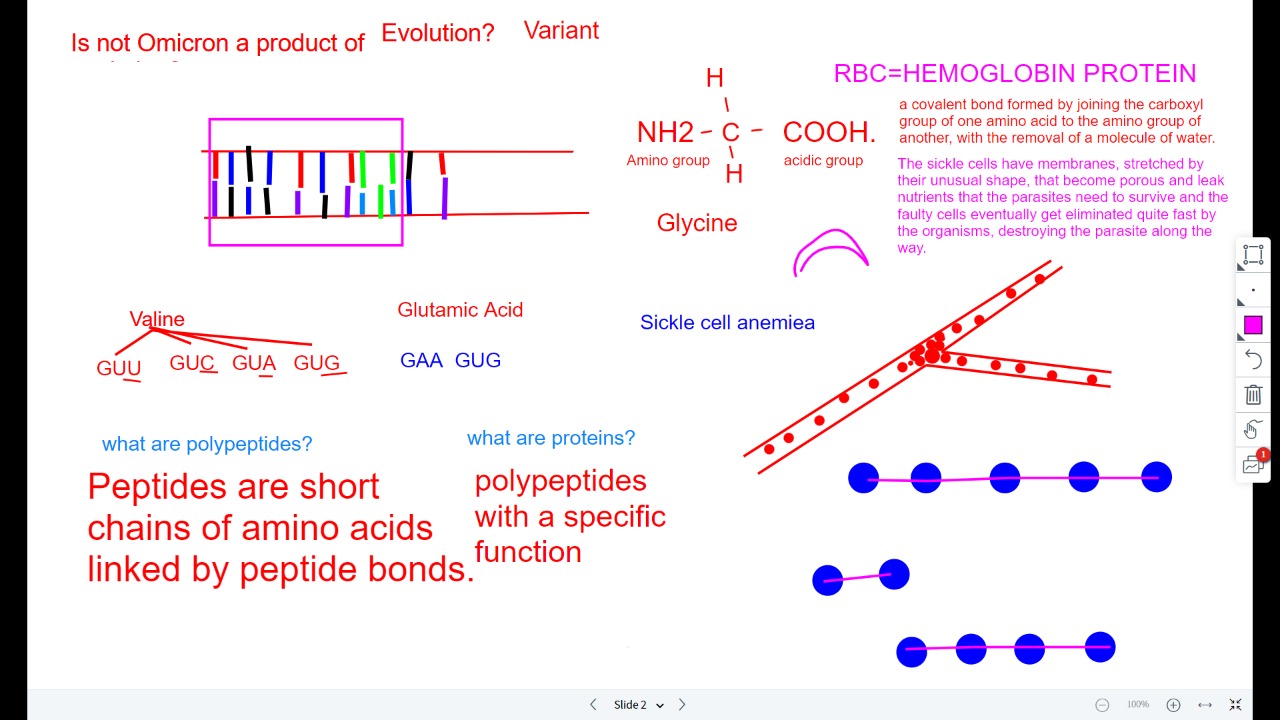 If not spontaneous generation how did different organisms come into existence can we probably answer it through evolution
one such recent example in different variants of Sars - Cov 2
To understand Evolution we first need to understand Mutation
One of the most common examples of Mutations in the curriculum is sickle cell anaemia
in sickle-cell anaemia, the gene for beta-globin is mutated. The resulting protein still consists of 147 amino acids, but because of the single-base mutation, the sixth amino acid in the chain is valine, rather than glutamic acid.
his mutation which seems to be causing sickle cell anaemia becomes helpful in cases of malaria
The sickle cells have membranes, stretched by their unusual shape, that become porous and leak nutrients that the parasites need to survive and the faulty cells eventually get eliminated quite fast by the organisms, destroying the parasite along the way 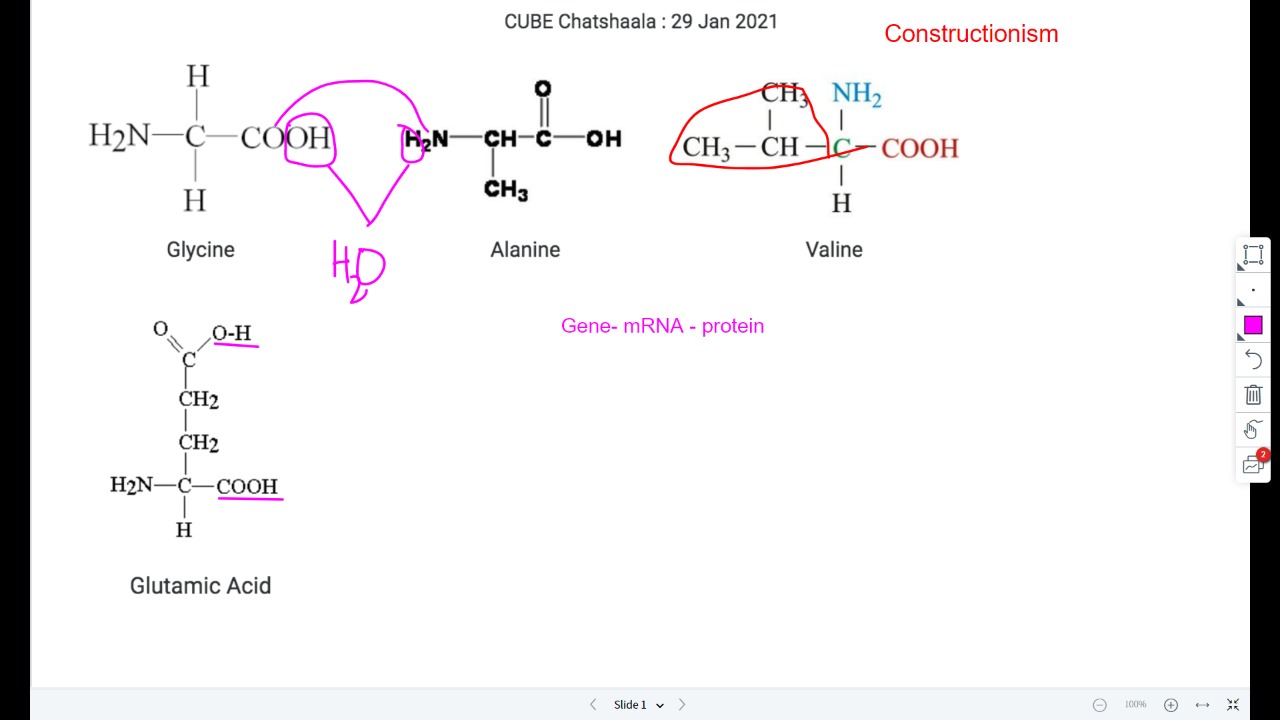 while the larger picture is Mutation we so need to understand what polypeptide is, what is an amino acid?

There is a good connection between RNA as initiation of life and SARS.
We also need separate threads on SARS and Immune system. 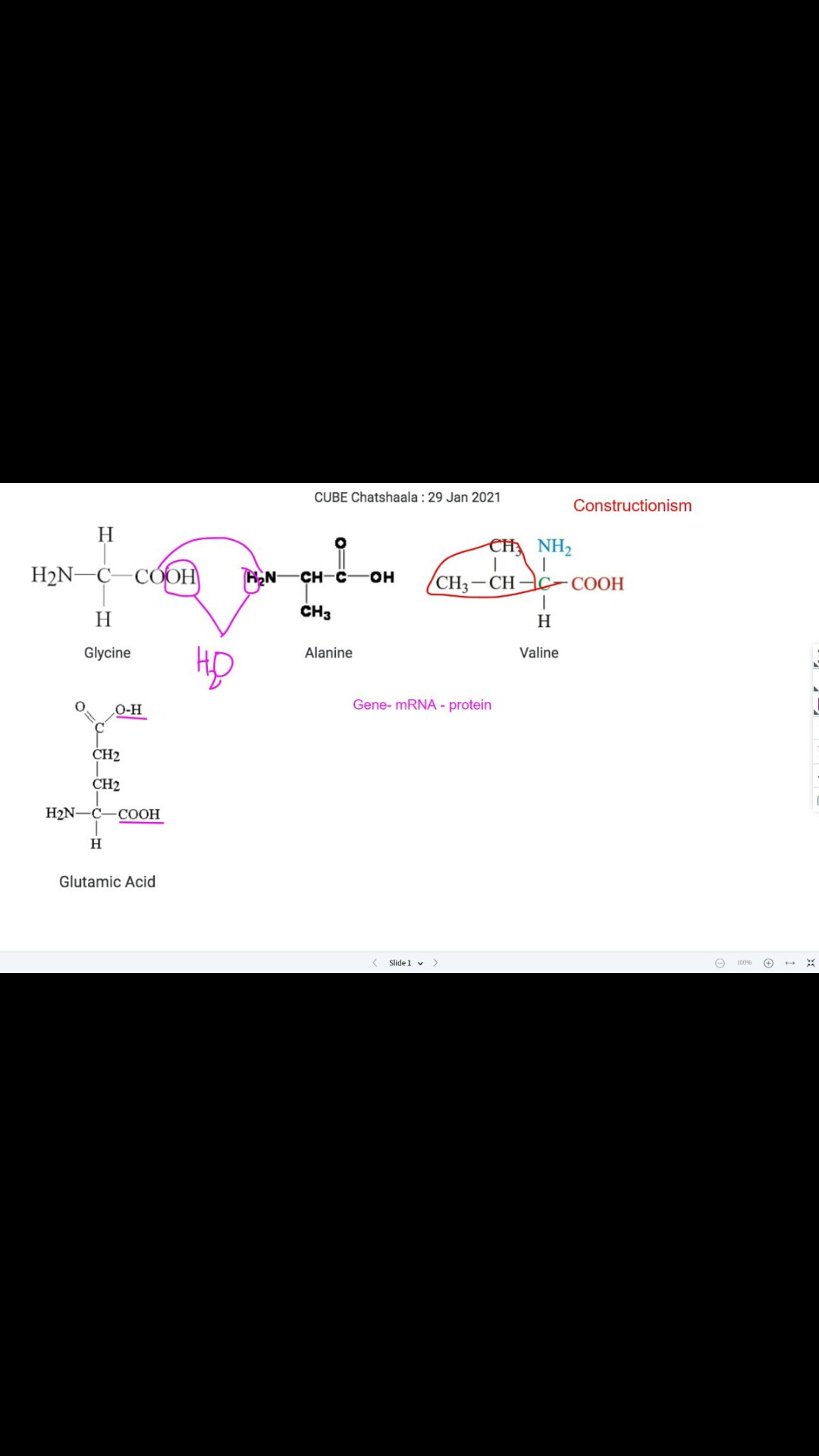 As the last summary ends on amino acids… We had a great discussion here too, and it was fun to talk about words like monopeptide bond, dipeptide bond, etc although such words don’t exist

… Ya sad but true, can’t help it. Well, so what are the words that do exist and we should know about…

Amino acids: Amino acids are molecules that combine to form proteins. They are the building blocks of life. Each amino acid has the same fundamental structure, which consists of a central carbon atom, also known as the alpha (α) carbon, bonded to an amino group (NH2), a carboxyl group (COOH), and a hydrogen atom. As you can see on the whiteboard above.

Peptide bonds: A peptide bond is an amide type of covalent chemical bond linking two consecutive alpha-amino acids from C1 (carbon number one) of one alpha-amino acid and N2 (nitrogen number two) of another, along a peptide or protein chain. As you can see in between of Glycine ka carbon atom and Alanine’s nitrogen atom here.

Peptide: A peptide is a short chain of amino acids. The amino acids in a peptide are connected in a sequence by bonds called peptide bonds.

Similarly, for carbohydrates there’s a glycosidic bond form in between of 2 sugar molecules, here H²O molecule is released

We got here to this topic from the discussion about sickle cell anemia as an example of mutation, so mutation is a change in a DNA sequence. When this type of DNA codes for mRNA the specific chain that we get of amino acid has some changes, like one amino acid is displaced by another. In this case of sickle cell anemia, the glutamic acid is replaced by valine
And apart from all these bonds, there are many more types of bonds in DNA itself, apart from hydrogen bond, we have bonds like phosphodiester bonds, ester bonds, etc. So we can discuss them in further ChatShaala discussion.