Beautiful insects in my garden

While watering plants in my backyard garden I found some amazing insects which were rather common sight in my garden but I didn’t know their names. So, I clicked their pictures and serched them with the help of google lens. Here is what I found ; 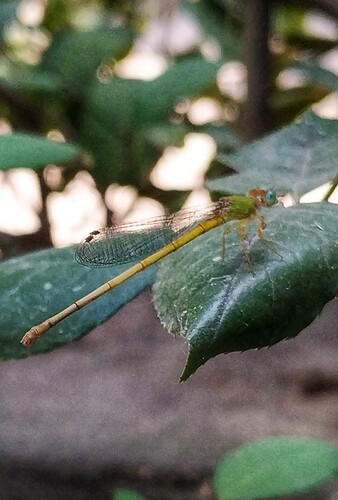 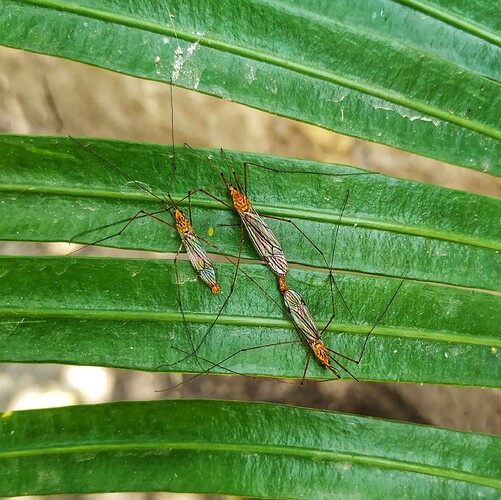 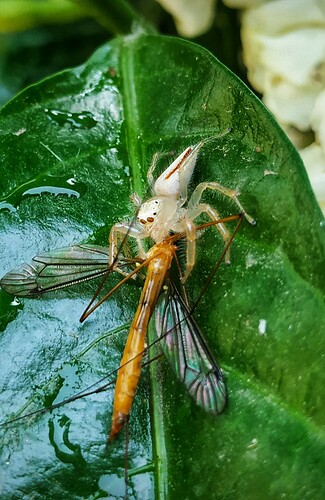 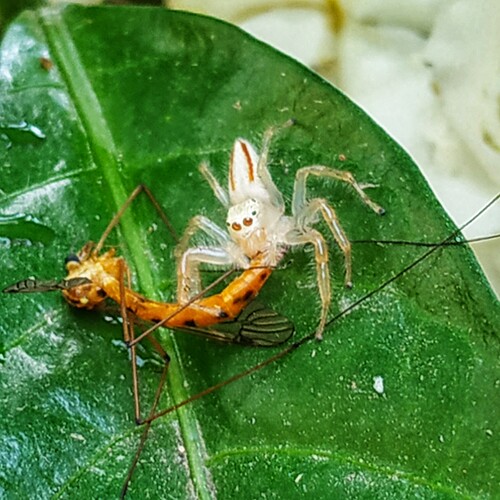 The two-striped jumper, or Telamonia dimidiata, is a jumping spider found in various Asian tropical rain forests, in foliage in wooded environments. Females can reach a body length of 9–11 mm (0.35–0.43 in), males can reach a length of 8–9 mm (0.31–0.35 in). The female is light yellowish, with a very white cephalus and red rings surrounding the narrow black rings around the eyes. Two longitudinal bright red stripes are present on the opisthosoma. The male is very dark, with white markings, and... 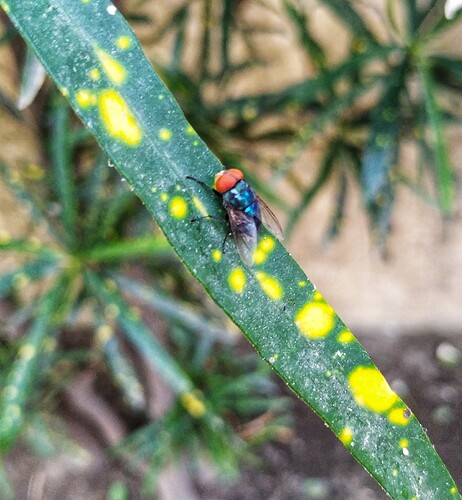 Calliphora vomitoria, known as the blue bottle fly, orange-bearded blue bottle, or bottlebee is a species of blow fly, a species in the family Calliphoridae. Calliphora vomitoria is the type species of the genus Calliphora. It is common throughout many continents including Europe, Americas, and Africa. They are fairly large flies, nearly twice the size of the housefly. They can be easily identified by their shiny, blue bodies. While adult flies feed on nectar, females deposit their eggs on r... 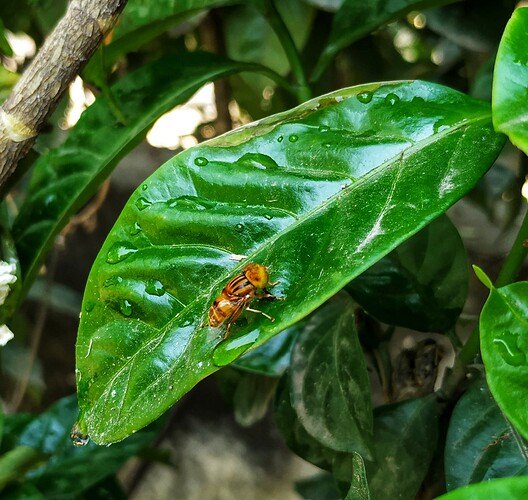 Some information about it: Eristalinus taeniops is a species of hoverfly, also known as the band-eyed drone fly. This species is present in part of Europe (Albania, Balearic Islands, Bulgaria, the Canary Islands, Cyprus, France, Greece, Italy, Malta, North Macedonia, Poland, Portugal, Spain), in North Africa, in the Near East (Turkey, Lebanon, Israel, Palestine), in the Caucasus, in the Eastern parts of Afrotropical ecozone to South Africa, in the Oriental ecozone (Nepal, Northern India), in Northern Pakistan and in Ir...

6 I found this spider which is big and hairy. It starts to make it’s web in our shed about 7:30 pm but in the morning it’s web is not there. It does it everyday. 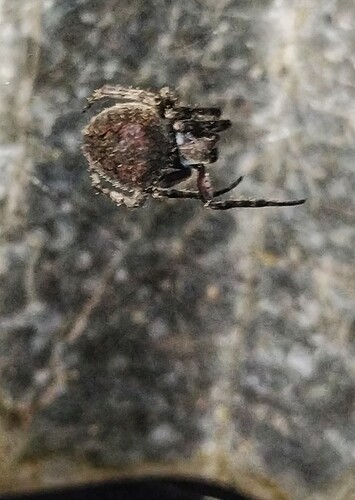 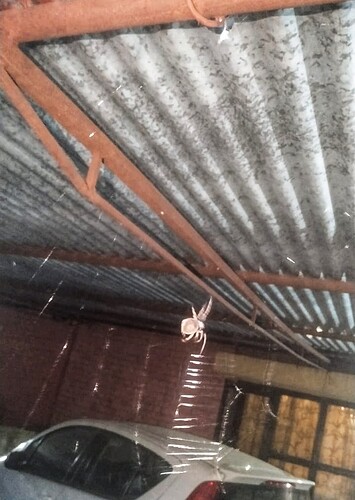 If you have observed any such insects in your garden , kindly share

I found this spider which is big and hairy. It starts to make it’s web in our shed about 7:30 pm but in the morning it’s web is not there. It does it everyday. With the help of my father, I caught the spider in a glass jar and took the following photograph: 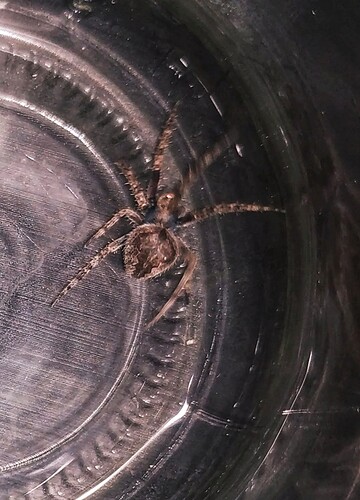 Woww…this is amazing!!
But are you sure this is exactly what you think?
I work on fruit flies…
We are concentrating on a particular species for our objective i.e. Drosophila melanogaster
When we do the identification of fruit flies…we do the taxonomical classification…

You arent looking for a particular species…
But there might be some species of these spiders which would look almost the same…but differ in some characteristics…
I might not be right.
Please correct me if I am wrong.

Just wanted to ask whether this is for sure what you think it is?
Isn’t taxonomical classification necessary here?

What do we understand by taxonomical classification?

This is how the taxonomical classification is done! 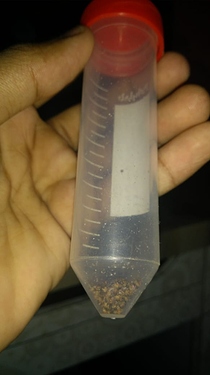 There is a large number of living organisms found on the earth. All these organisms show variations in their shape, size, structure, habit, habitat, nutrition, etc. It is difficult to remember the characteristics of all the organisms without their...

Mam,
I think I could be wrong. It was wrong not to follow the procedure.
I was not aware of the process as I have not studied it in my books.
I used Google Lens to identify these. this could be a mistake because there were many results and I used the ones I found close.

In case of the last spider there were the following observations which made me think that it was an orb-weaver spider.

Just wanted to ask whether this is for sure what you think it is?

I think I could be wrong.

Yes, it is very necessary.

It is also possible that it could be a similar looking spider. My conclusion may be wrong. But I don’t want to kill the spiders to study them.

I will learn about it and follow the correct method.

Mam, do we need to kill them?
Can we study them alive?

Of course you can study them alive.
How big is this spider…
I can see that you can take pictures easily of this spider inside the glass jar.

What do we need for identification of your spider?
What do you think? @Pritika

So what is your plan?
How would you like to proceed further with this identification?
What is your objective? What is so special about this spider?
Or are you identifying it just because you found it!?

@Lydia I have released it after taking photographs.

Ohh Ohh…
Are there enough pictures for its identification?
Can you upload the pictures here?

These are the images I have. One in the jar. Others in its web. 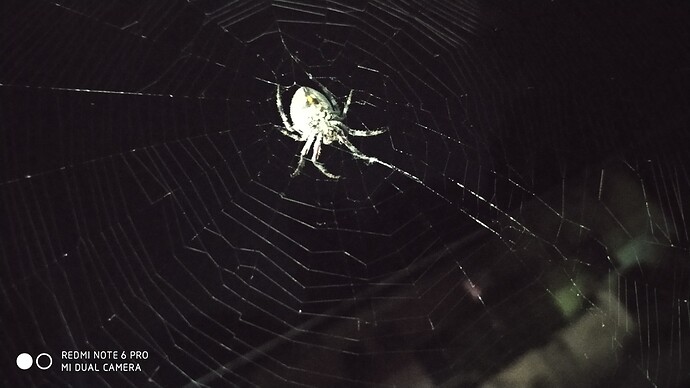 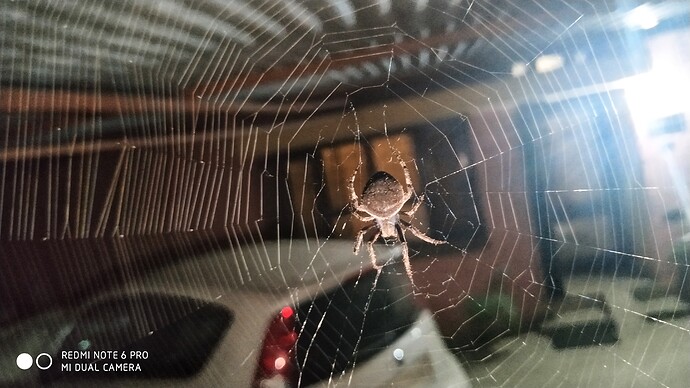 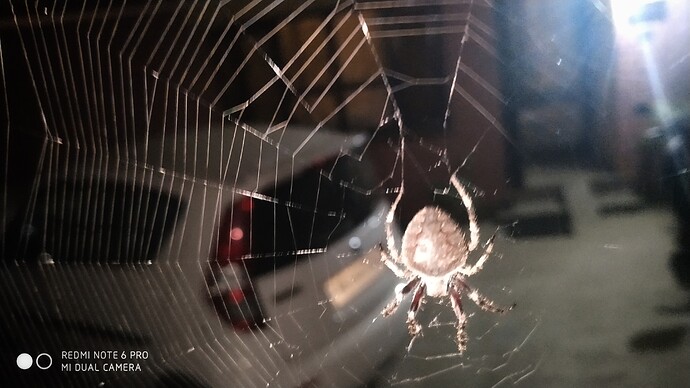 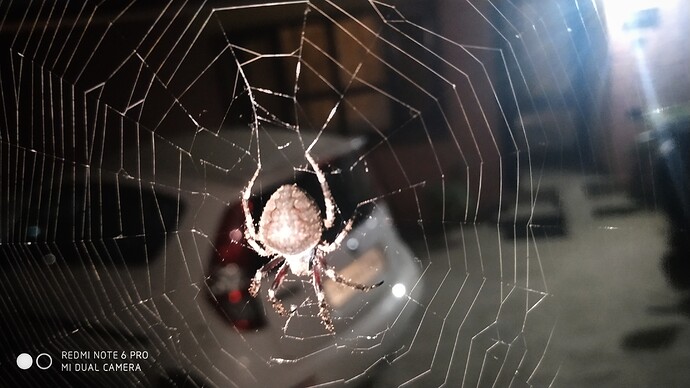 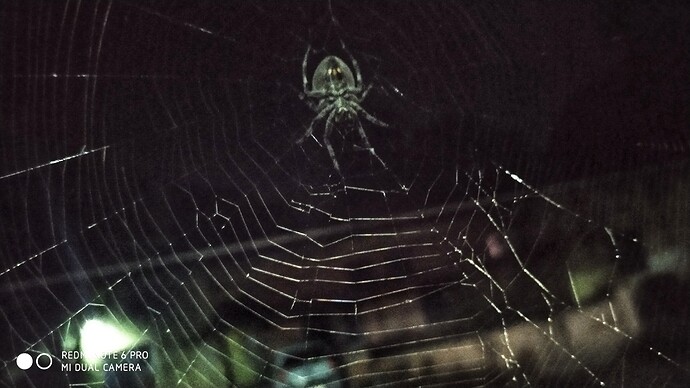 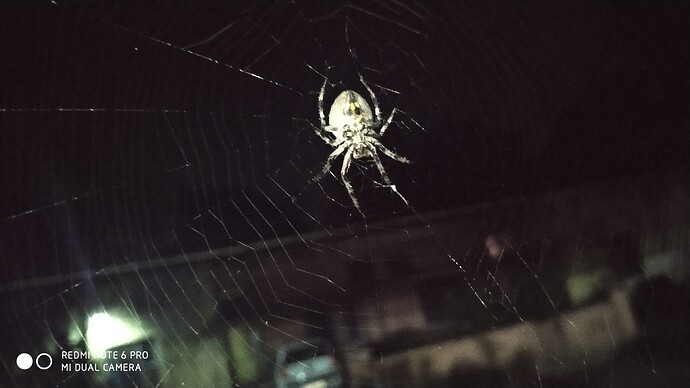 That’s some good discussion going on.

Just like the expansion of CUBE - Collaboratively Understanding Biology Education.

That’s how, I believe, things should be learnt. She might not have read taxonomical classification in her textbooks, but then why learning should only be limited to text books. Why should someone else framing curriculum decide what we should learn and what we want to learn?
Why should she wait to reach a particular class to learn?

This is the true spirit of CUBE. Hats off to the creator of this learning platform. With a mentor like @Lydia , @Pritika would definitely learn new things, explore new things, learn to follow the scientific principles, reach a conclusion in a logical manner and that’s what education is all about.
Godspeed!

Yes sir,
We all are learning…
No age restrictions for learning.
A school kid can also learn taxonomy without any difficulty.

When we were having our CUBE summer workshop in the year 2018, we had school kids also joining us in whatever we were doing.
Those kids are very excited in doing all these trapping, catching, fetching for all that interests them!!

I’ll tell about my experience with these kids.
I had some 8th std students along with me for the fruit fly works.
He learned how to trap fruit flies!
It isn’t that difficult when we actually do it.
But outsiders would think…how can we trap fruit flies?

If you ask those 8th std students, they will say
Take a dry plastic bottle, and some banana peels with some cotton plug or anything to close the bottle.
Thats all!
They also know the classification…how do we identify an organism…
When you ask them how will you identify an organism…
They will start from
Kingdom, Phylum, Class, Order, Family, Genus, Species

So as Sir said, we can learn things without looking at our textbooks…

but then why learning should only be limited to text books.

So @Pritika
As you have these photos…let’s see if it would help us in identification.

We’ll go step by step…
What say @Pritika
In this way, you will learn the so called "Taxonomical Classification"
This will be a context for your curriculum as well

All these classifications will go step by step…

Which species are you focussing on @Pritika?

Great archives!
Let us start identifying our Spidey and see where it takes us alongside grabbing some references!

And also, as @Lydia mentioned, it would be like getting a Context, for our Curriculum!
So, for that, we need to start from the basics!
By basics, I mean that classifying our organism right from the start! Starting with the Kingdom of it! 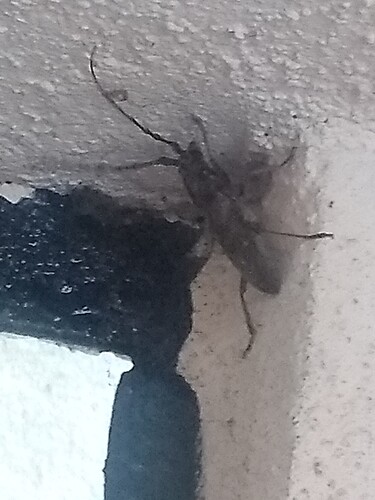 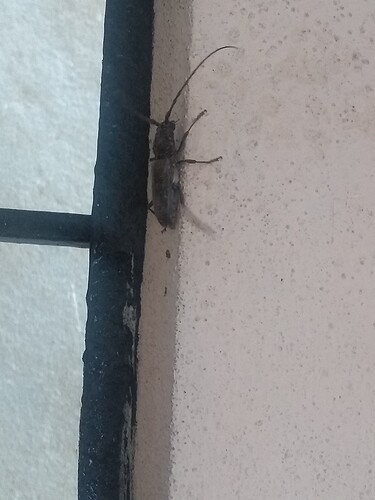 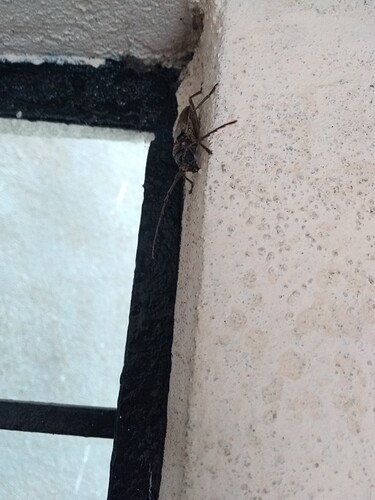 Batocera rufomaculata is a species of beetle in the family Cerambycidae. It was described by Charles De Geer in 1775. It is known from China, Israel, India, Jordan, Lebanon, Laos, Mauritius, Malaysia, Madagascar, Myanmar, Puerto Rico, Pakistan, Réunion, Syria, Sri Lanka, Thailand, Barbados, Bangladesh and the Virgin Islands. It feeds off of Ficus carica, Carica papaya, Mangifera indica, and Shorea robusta. It can be parasitically infected by Avetianella batocerae.

I used Google Lens and there were some suggestions. But I suppose the insect is Batocera rufomaculata. But, a question arises in my mind. According to the information on Wikipedia, it is parasitically infected by Avetianella batocera. That means is it a dangerous one?

One of the issues that we all face seems to be the quality of photographs. An common person doesn’t have DSLR camera and the the normal mobiles are not capable of taking good pictures in the dark. And most of the enchanting insects come out only after dark.

Sometimes we are afraid of going near the insects.

@Venkat
Its inspiring to see other enthusiasts take part in the discussion and share their findings.
Good learning.

What are the diagnostic features for identifying this Batocera rufomaculata?
Features which you can easily look at and identify it as this species…

Actually, there are some things I wish to mention. I live in a apartment. We barely have some plants in the pots only. This insect is definitely a beetle with large horns as we can conclude that from the images. I saw it in the balcony and taken a snap of it. This beetle needs a tree. There are no large trees or normal trees in the neighborhood of my place except at second house next house my place. The second house next to my house has large mango tree and the insect that I have taken picture was found on that side in the direction of large mango tree. The insect seems not interested in our place. It moved on the walls and in the direction of mango tree. I am sure that the family that insect belongs to it is Cerambycedia. Ten; see text The longhorn beetles (Cerambycidae; also known as long-horned or longicorns) are a cosmopolitan family of beetles, typically characterized by extremely long antennae, which are often as long as or longer than the beetle's body. In various members of the family, however, the antennae are quite short (e.g., Neandra brunnea) and such species can be difficult to distinguish from related beetle families such as the Chrysomelidae. The family is large, with over 26,000 species described...


And the subfamily will be lamiinae. As I checked some information on 10 subfamilies of Cerambycedia. Many, see text Lamiinae, commonly called flat-faced longhorns, are a subfamily of the longhorn beetle family (Cerambycidae). The subfamily includes over 750 genera, rivaled in diversity within the family only by the subfamily Cerambycinae. Lamiinae contains the following tribes:


And the reason it was on the outside of balcony is because it is accidental invader. 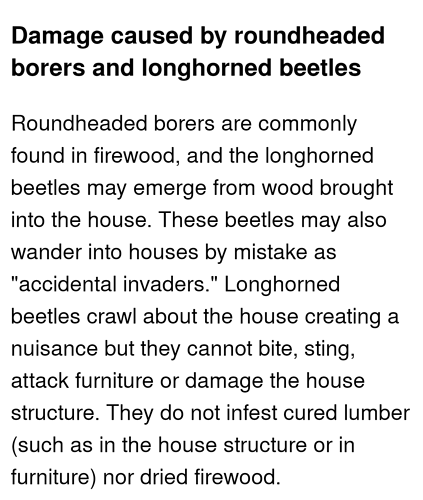 There are like 750 genera belong to lamiinae. So, if I go with like with the information I got with Google Lens, the suggestions I got belong to Batocera. There are around 63
species belong to Batocera and the species that belong to Batocera can be found in North India, Northeast India and East India. But my place belongs to South India. So, I am back to one thing that this insect does not belong to Batocera and this insect belongs to Cerambycedia but not sure about subfamily also now. I have to get some more information.
https://lamiinae.org/batocera.group-6515.html
I suppose now that this insect may be Hoplocerambyx spinnix because the image I found on this below web page reminds me of the one that I have taken. The image and my pic also seems somewhat matching.
https://species.m.wikimedia.org/wiki/Hoplocerambyx_spinicornis