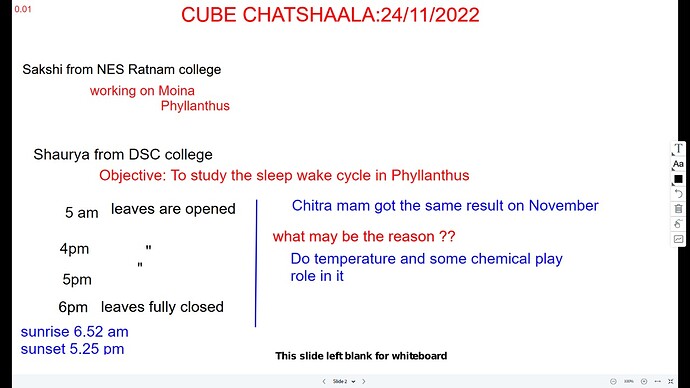 What does *Cubists are doing in this days *

!!
@Shourya from *DSC college took an initiative to observe the sleepwake cycle * in Phyllanthus .

Along with@shaurya Cubists from *different parts of country * had joined .

@Lahari From Nellore ,@Amritha from Alathur , @ichha from Thane ,@ Lakshmi from Thrissur ,me from Kozhikode ,@sakshi from mumbai were joined . 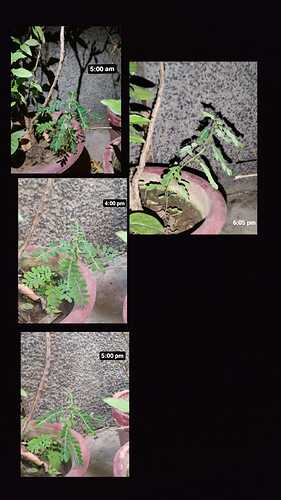 As per the data analysis:

*Leaf opening and closing not coincide with sunrise and sunset time * :

Found that Phyllanthus leaves opened at 5 am that is earlier than the sunrise time .
Also leaves closed at 6 pm and the sunset time was 5.25pm. 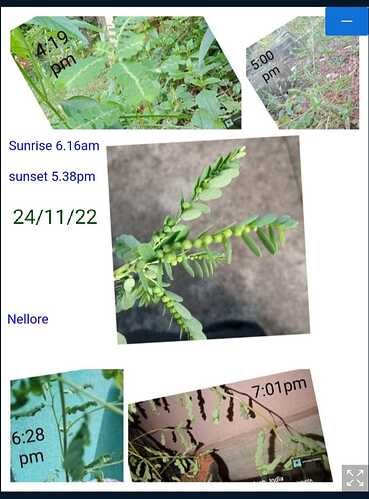 What is the *Actual mechanism that triger * the leaf opening and closing​:sleeping: 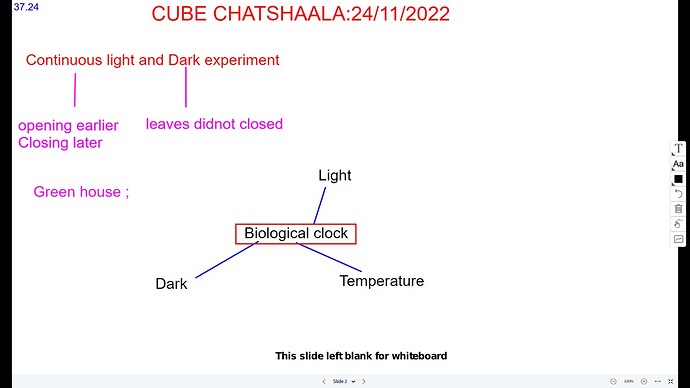 Is there *any endogenous chemical factor controlling * this​:first_quarter_moon_with_face:

I still remember the discussion was on last March related to leaf opening and closing in Phyllanthus !!!

[Screenshot (583)] Summary of today’s CUBE Chatshaala Discussion:- :sparkles:The discussion started with finding out the possible links of the circadian rhythm of Phyllanthus plants with Arabidopsis plants. :maple_leaf:But we also need to understand how circadian rhythm in Phyllanthus works!!

Theertha from Kerela found a Research paper by two Scientists Yoko Nakamura and Minoru Ueda from Department of Chemistry of Tohoku University, Japan that tells about the Chemical… 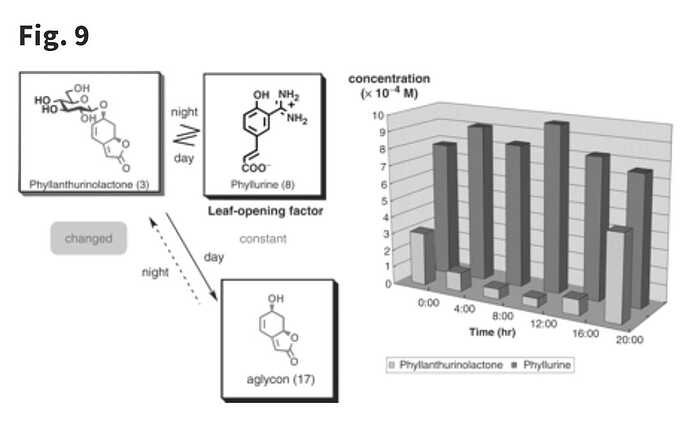 @shaurya from DSC is actually try to *find how actually these endogenous factor work * !?

In this bar diagram also shows that the concentration of the *leaf opening factor 8 remained nearly constant during the day whereas that of the leaf-closing factor 3 decreased during the day *.
Factor 3 is responsible for the leaf closing . 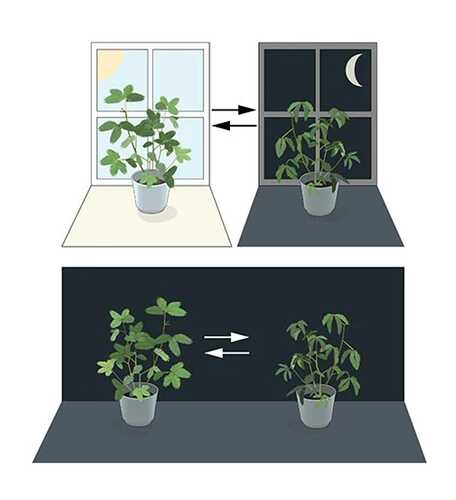 In 18 th century(1729) Jean Jacques d’Ortous de Mairan Done an experiment with touch me not plant(The leaves of the mimosa plant open towards the sun during day but close at dusk (upper part).

Jean Jacques d’Ortous de Mairan *placed the plant in constant darkness (lower part) and found that the leaves continue to follow their normal daily rhythm *, even without any fluctuations in daily light.)

Is there any *similarity and similarity with Marian work with Cubists work * . 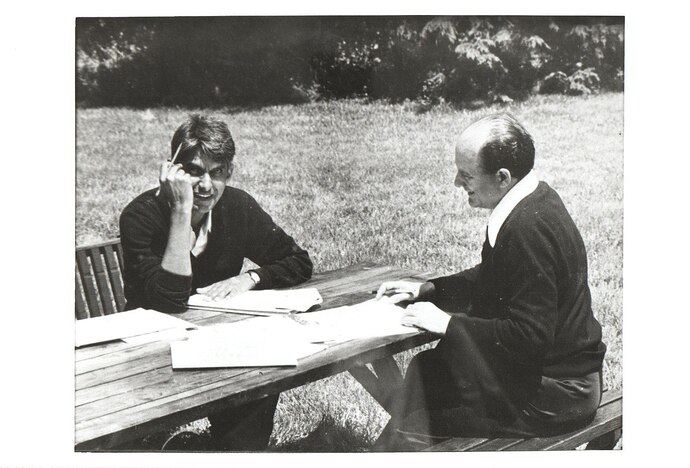 In 20 th centuary(1971) **Seymour Benzer and Ronald Konopka invent the PER protein by observing different rhythmic pattern in 3 Fruitflies * .(They demonstrated that mutations in an unknown gene disrupted the circadian clock of flies).

Do *CUBE and Cubists have any connection with Seymour benzer *

Ye we do have

In the *field of neuro-genetics, Dr. Siddiqi, along with Seymour Benzer * discovered *temperature-sensitive paralytic mutants in Drosophila *, and the generation and transmission of neural signals.
http://nobelprizeseries.in/tbis/obaid-siddiqi

Both Benzer and Siddiqi started getting interested in the biological basis behavior or rather in the molecular basis of behavior. Siddiqi was soon to contact Benzer and both of them started studying the electrophysiology of the historic ts (temperature sensitive) mutants, at Caltech. To this day, ts (temperature sensitive) paralysis remains one of the most dramatic demonstrations of nerve function in an intact organism.

simple model systems and sophisticated questions the scientific legacy of... 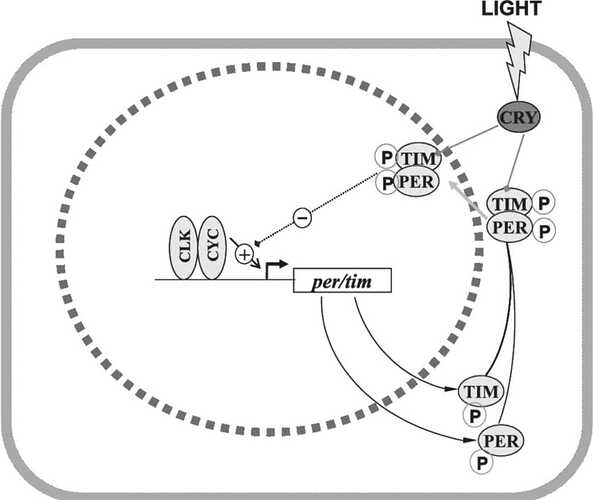 *Nobel prize * *in physiology and medicine in 2017 was awarded with Jeffrey C. Hall, Michael * *Rosbash and * *Michael * W
for their *discoveries of molecular mechanisms controlling the circadian rhythm *

Scheme illustrating principles of genetic interactions in the circadian clock mechanism of Drosophila melanogaster.
In the clock-containing cells, per and tim are activated by CLK-CYC complex. *PER and TIM are phosphorylated (P) and form heterodimers, which enter the nucleus and inhibit CLK-CYC activity *.

Reference shared during chatshaala discussion on 24/11/2022

Nobel prize of physiology and medicine on 2017 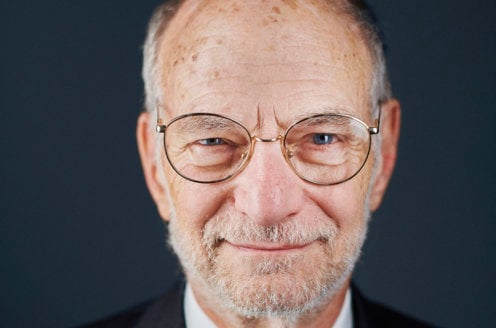 The Nobel Prize in Physiology or Medicine 2017

The Nobel Prize in Physiology or Medicine 2017 was awarded jointly to Jeffrey C. Hall, Michael Rosbash and Michael W. Young "for their discoveries of molecular mechanisms controlling the circadian rhythm"

The light/dark cycle of the sun has a powerful effect on the circadian clock, sleep, and alertness. If you understand these effects, you can manipulate light exposure to help yourself sleep better at night and be more alert during the day.

The light/dark cycle of the sun has a powerful effect on the circadian clock, sleep, and alertness. If you understand these effects, you can manipulate light exposure to help yourself sleep better at night and be more alert during the day.