Hi, today I am going to tell you about the history of Corona virus.

Corona virus was first characterized in the 1960s, this was responsible for a substantial proportion of upper respiratory tract infections in children.

The history of human Corona viruses began in 1965 when Tyrrell and Bynoe1 found that they could passage a virus named B814. It was found from obtained from the respiratory of an adult with a common cold. At about the same time, Hamre and Procknow2 were able to grow a virus with unusual properties in tissue culture from samples obtained from medical students with colds. Both B814 and Hamre’s virus, which she called 229E.

From then there are 7 types of corona virus.

All seven types of human Corona viruses cause upper respiratory infections. Symptoms resemble those of the common cold or flu and may include:

There are four common human coronaviruses:

It was originated in bats and it was transmitted to other animals before infecting humans. Due to this, during the 2002-2003 epidemic, more than 8,000 people in 26 countries around the world contracted SARS. There were 744 reported deaths.

According to WHOTrusted Source, it emerged in September 2012 in Saudi Arabia, although initial cases were later traced back to Jordan.

There were more than 2,400 MERS reported cases. To date, the majority of cases have occurred in Saudi Arabia.

SARS-CoV-2 causes COVID-19. This new Corona virus that appeared in Wuhan, China, in late December 2019 after health officials noticed an increase in pneumonia cases with known cause.

These cases have since been linked to a market selling seafood and poultry, Though the virus has evolved after coming in the contact of animals.

Within a few months, SARS-CoV-2 has spread to hundreds of countries around the world after being transmitted through person-to-person contact.

The primary symptoms of COVID-19 include:

More symptoms of COVID-19 include:

COVID-19 might feel different than symptoms of a cold, the flu, or allergies. In addition, not everyone with a SARS-CoV infection has symptoms.

These are some top country suffering from covid-19.

Graphical repersentations of some country 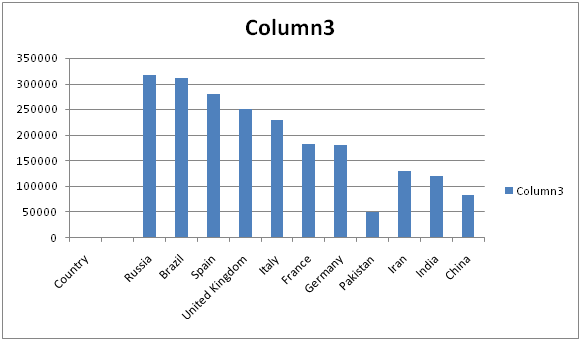