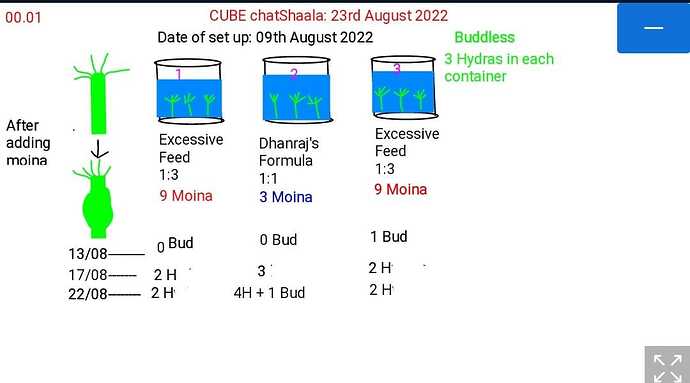 The discussion started with @sakshiconsultant2002 telling us about Hydra and Moina cultures at N.E.S Ratnam College.
Sakshi was telling us how Hydras feed on Moina. Further Sakshi said that Hydra suck moina.
TINKE (this I never knew earlier) I used to think that Hydra swallow whole Moina.
So Sakshi has noticed that Hydras such the inner portion of Moina and release the exoskeleton and she has observed the exoskeleton of moina floating in water.

Then we started to discuss about the experiment that she and her collaborators are carrying out.

Sakshi’s expectations were that the hydras in setup 1 and 3 (being fed with 3 moina per hydra) will be budding faster.

So the current status of the 3 setups is that in setup 1 and 3 there are 2 hydras i.e. hydras have decreased in number.
And in setups 2 there are 4 hydra+1 bud.
So currently @⁨Dhanraj Tribhuvan’s method is working
But setup 2 did not have any replicates so we cannot conclude this as it might be a chance finding.

Hydras are an excellent model system for Regeneration.
When a hydra is cut into 3 pieces they will regenerate and develop into 3 new hydras.

Similarly Earthworms also have a great capacity for Regeneration.
Generally when an earthworm is cut in 2 pieces, 1 of the 2 pieces will definitely regenerate.

I had done some experiments to study regeneration-
So I had taken a mature earthworm and cut approximately 20 segments from the tail end of the earthworm. I was expecting that the long tail piece will regenerate and live on and the tail piece died within a few hours of amputation.
The head piece healed the wound and regenerated as expected and lived for 3 months.
The tail piece also healed the wound and showed some regenerated segments and it survived for 81 days!!
I’m not sure whether the regenerated segment were head or not.
So how did this tail piece survive without eating for 81 days?
There could be 2 ways-

The earthworm body will have glycogen stored in its body and in condition of starvation the glycogen will be broken down to glucose, which the earthworm will use to produce energy.

Earthworms breathe through their skin so breathing won’t be problem when they are cut.

Then @⁨Theertha CUBE⁩ asked do earthworms also have stem cells like hydra.
From what I know when an earthworm is cut the cells near the cut will dedifferentiate and divide this division will cause a mass of undifferentiated cell this mass is called blastema. Then the cells in blastema will redifferentiate and form segments and the earthworm will regenerate.