Got Kitchen Flies? Got Nobel-Prize! - A study of the Circadian Rhythm of the Fruit flies

In Latin, the word Circadian (Circa-about, Dies-day) means about day. It is a biological process which occurs in every living organism and regulates the sleep-wake cycle of the organism.

The Circadian rhythm (also known as your sleep/wake cycle or body clock) is a natural, internal system that is designed to regulate feelings of sleepiness and wakefulness over a 24-hour period. This complex timekeeper is controlled by an area of the brain that responds to light, which is why humans are most alert while the sun is shining and are ready to sleep when it’s dark outside (not always though).

But why are we studying the Circadian Rhythm of Fruit flies?

We all may think that Circadian Rhythm occurs in humans too, then why study in fruit flies. We are studying it in fruit flies because they can be easily trapped, they can be maintained at home and in labs and also, their life cycle gets completed in one and a half week. THEY ARE THE NOBEL-PRIZE WINNERS! When we keep a rotten fruit or vegetable and have a look at it closely after some time, we will be able to see Nobel-Prize wandering over them, I mean Fruit flies wandering over them.

Biological Rhythms were first studied in Drosophila and these biological rhythms also included the study of Circadian Rhythms. This discovery has led to the understanding of the sleep-wake cycle, its molecular mechanism and the diseases related to the sleep-wake cycle like insomnia, excessive daytime sleepiness. Drosophila circadian rhythm was discovered in 1935 by German zoologists, Hans Kalmus and Erwin Bünning.

Biologist Colin S. Pittendrigh provided an important experiment in 1954, which established that circadian rhythm occurs because of an internal biological clock. Seymour Benzer (the pioneer of the Standard Drosophila melanogaster CsBz flies) and Ronald Konopka discovered the gene called period (per), mutations of which alter the circadian rhythm. It was the first gene known to control behaviour.

The 2017 Nobel-Prize in Physiology or Medicine was awarded to Jeffrey C. Hall, Michael Rosbash and Michael W. Young for their discoveries of molecular mechanisms that control circadian rhythms in Drosophila melanogaster. Also, around a decade after Benzer and Konopka’s discoveries, the 2017 Nobel-Prize winners discovered the genes called cyc (cycle), tim (timeless), cry (cryptochromes) and clc (clock), which along with their proteins products, play an important role in the biological clock.

Below here is the molecular mechanism that controls circadian rhythms in fruit flies.

At night, the Period per protein and Timeless tim protein are complexed together which induces sleep in the fly.

This is their first function.

The second function is that the per-tim complex (protein complex) binds to the period and timeless genes due to which the respective genes are unable to express.

By unable to express I mean that they won’t be able to transcribe mRNA for per and tim proteins due to which no additional protein complexes will be formed.

All this is happening in the night and may be called a SLEEP STATE.

In the morning when there is Light, the Light degrades the tim protein from the per-tim complexes which were existing earlier.

And because of this, the per-tim complex gets unstable and the remaining per protein degrades.

THE FLY WILL WAKE FROM IT’S SLEEP

Which means that now the period and timeless genes are not bound with the complexes and hence mRNA will be produced as earlier which will give rise to more COMPLEXES.

All this is happening during the day time.

Now, as the genes are not bound by the complex, their expression will begin due to which complexes will be produced.

But in the presence of sunlight, again the tim protein from the per-tim complex will degrade and also if tim is not there, per will also continue degrading.

At Sunset,
The degradation of the tim protein will stop and it will become complex with per protein.
This complex will again bind to the period and timeless genes and stop it’s expression.

This will happen after Sunset.
Now, when the formed complexes will be enough to reach the threshold level, (cut-off for sleep), the fly will experience sleep!

So, we see that there is a defined balance between the protein synthesis and protein degradation time to time which is called Protein Turnover. 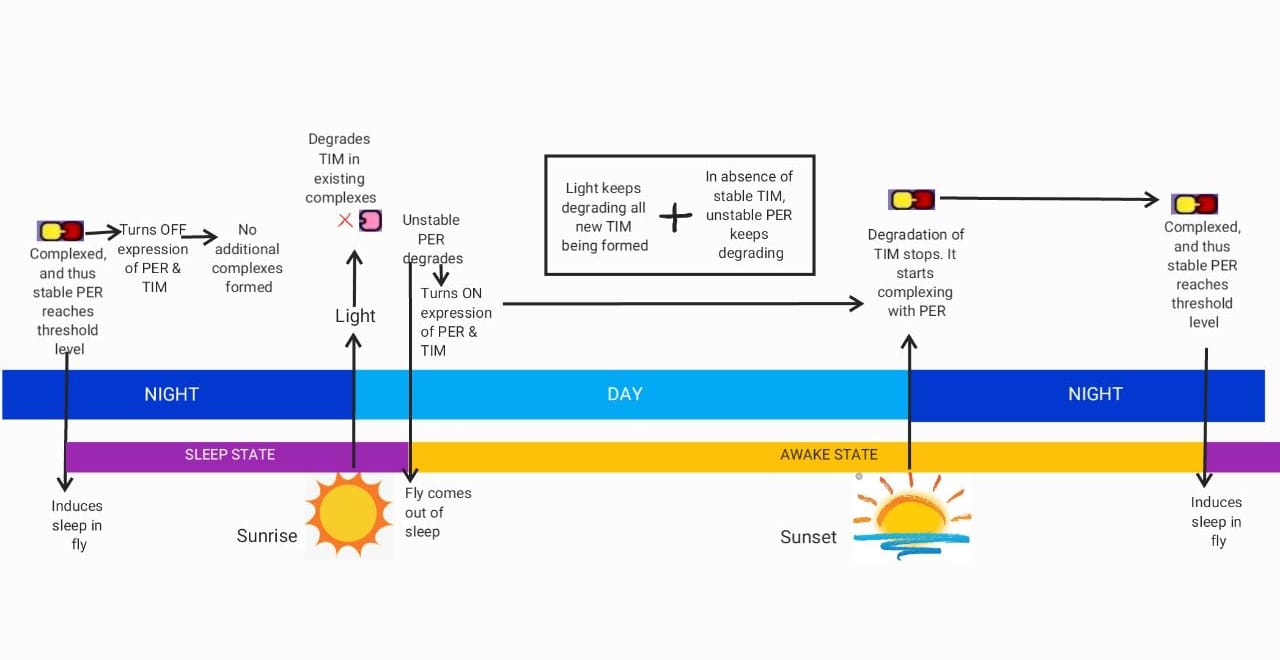 More to be added soon!

Back to home page

All about FRUIT FLIES! Wiki

FRUIT FLIES!! Ever heard of it? Most of us must have heard of it. What if we ask a layman, what is a fruit fly? Or what if we ask a watchman or a gardener, they might be not familiar with a fruit fly. So how will you explain or tell a person what a fruit fly is? There is a fly which comes into our kitchen if they get to smell some fruits… They get attracted to the rotten smell of fruits as well These small flies are the fruit flies that we are going to talk about. A great easy introducti…

3 Likes
All about FRUIT FLIES - Our Model - The Nobel Prize Winners!