Griffith's Experiment with Floral Bud of a Plant Cardamine

On 10th Jan, 2022 we had discussion with @Rati and @Abhijeet on the topic of their work on Genetic Engineering in their plant a weed Cardamine which is easily available around them.
In the discussion, we talked about a plasmid Ti which is used to add the desired gene of interest and transformed into a host plant using a vector such as Agrobacterium tumifeciens.
However, this is a difficult method, hence @Chitralekha, mam asked is it not possible without vector?
Rati emphasized, no without vector we cannot transfer DNA, but Chitralekha argued it happens in Griffith’s experiment.

Griffith’s experiment is the one in which a mice is injected with S strain, a virulent toxin producing strain, resulting into death of mice.
When R strain which is a non-virulent strain is injected mice remains alive.
However, if we heat kill S virulent strain and inject it along with R a non-virulent strain, the mice surprisingly dies, this is due to transformation of DNA from virulent S strain into R strain, which turned R strain also virulent.
This is how genes transform and recombine in nature.

We later connected the dots, and came up with idea if we can do same way in our plant cardamine also to transform it genertically? we can introduce bud of our plant into DNA with desired genes, the desired genes will enter into gametic cells (andrecium and gynoceium) of plant and transform its DNA, which can pass on to next generation, to help us get a genetically modified plant.

Abhijeet and Rati asked question if we also take up DNA from the food we eat via, transformation?
Chitralekha pointed even if we do, still it wont pass on to next generation as it is not happening in gametic cells which are involved in reproduction.

We enjoyed how genetic changes/engineering goes on everytime in nature through transformation.
And we decided to perform Griffith type experiment on our Cardamine plant floral bud to genetically transform it. 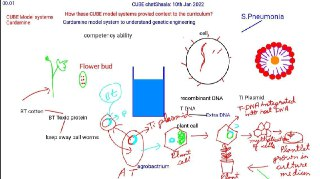 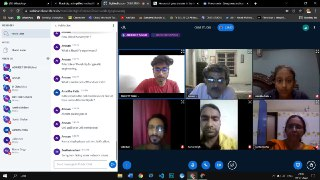 Participants of Chattshalla on 10th Jan, 2022

Would the DNA in banana that we eat gets taken up by our cells in digestive track like in Horizontal Gene Transfer? @jaikishan @Abhi0703 @KiranyadavR @saida786110 @Gene