How to identify which species my earthworm belongs to

Dear All,
We have very enthusiastic cubists, who are searching for earthworms near and around their homes. They are trapping and culturing the earthworms because lot of research questions can be answered using this model organism. For e.g. regeneration is one of the fascinating question which is intriguing to all. There are multiple species of earthworms that exists in India and every species is different from another. One of the major challenges while working on earthworm is how to identify “which species my earthworm belongs to ?”

Before we jump to identification lets understand the basic terms:
Earthworms like moist, cool soil. This means that there will be more earthworms around at wetter and cooler times of the year, or near water ways, ponds, rivers, and other consistently wet places. Earthworms are invertebrates, which means they have no back bone (unlike snakes, which do have a back bone). Earthworms are annelids and are members of the class Oligochaeta, because they crawl using circular and longitudinal muscles which are located under the epidermis. Each segment also has bristle like setae (see figure) which help to anchor their segments as they crawl. Unlike humans, earthworms do not have a well developed respiratory system. Instead of lungs, they breathe through their skin which needs to stay moist for breathing.

Lets Start a conversation where I welcome one and all to contribute in this hunt of identifying an earthworm species. Lets start with the knowledge that is available in the literature and everyone please add their own experiences that can help in species identification.

Now lets come to identification and try to list the characteristic features which can help us in identifying the species
Body type: Small (0-5.5 cms), Medium (5.6-11 cms), Large (11 cms and above upto ~30 cms)
Body Colour: Dark red or red-violet, Greyish pink (grey body pink nose), Green Tinge and other colors
Below is the figure for the species found in Canada…Ofcourse we should develop forsimilar map for our country that is India.

Reference:Worm Watch - This image is used for teaching purpose

Lets use this as a key for identifying our home lab earthworms. However we have to evolve and make a map like this for the earthworms available near our home-labs.

@Himanshu can you also share the reference for the same?
@Misbah @iram can you try to identify your earthworm with the help of the steps @Himanshu mentioned?

During the Chatshala discussion dated 28th of October 2022, Diksha- a cubist from K.J Somaiya College Mumbai have attempted to identify her earthworm species based on the writeup as well as key characteristics features discussed. Initially she started that all the earthworms she has were red wigglers on the basis of colour, but later on the basis of the characteristics discussed using chatshala, she was able to identify three species in her culture of earthworms. Here is the summary given by @Diksha …

We discussed one of the interesting topics today, that is, how to identify the species of earthworms.

Earthworms are not only differentiated by their colour, but also by their saddle.
Position and colour of the saddle, earthworms size and length.
Distinguishing earthworms will help us to know more about their features. And according to it we can categorize them and study their anatomy. 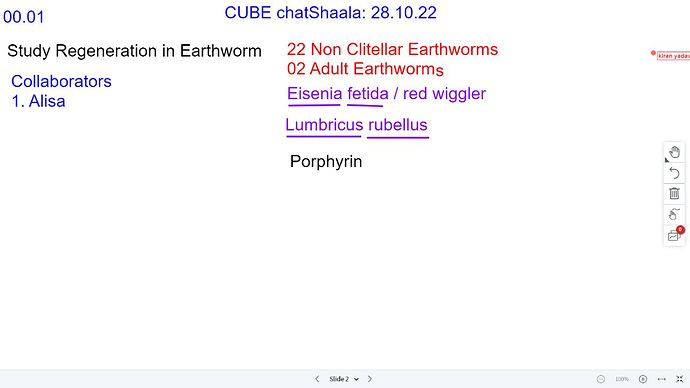 The earthworms are reddish brown in colour, because of the pigment present in them called porphyrin, which protects the earthworms from harmful UV rays.

Species i have in my CUBE lab based on their characteristics are 1) Lumbricus terrestris. It is reddish brown on the one part, whereas whitish on the other. It is also bulgy in the end. 2)Eisenia fetida. Its saddle colour is similar to the rest of the body. It is shorter and narrower. 3)Eisenia Veneta. Its saddle colour is different from the rest of the body. It is long and broad. 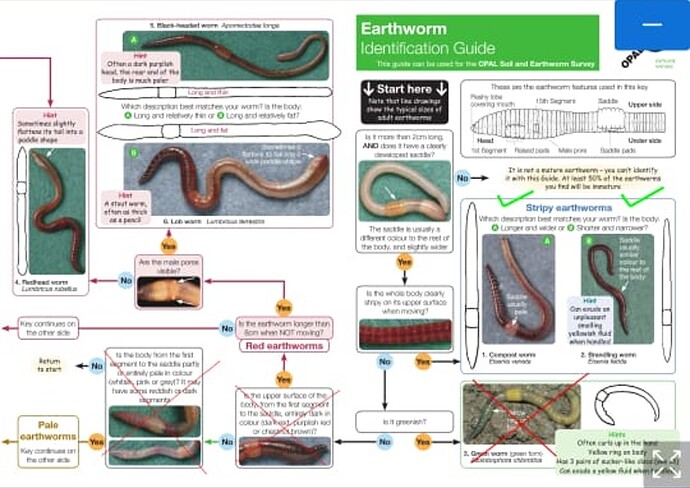 What are the key characteristics which can help us in identifying the species?
As diksha told Earthworms are not only differentiated by their colour, but also by their saddle.

Structure, position and colour of clitellum and saddle. colour, size and length of earthworm would also help as it’s clearly visible

**Role of logical reasoning in identification of earthworm species? **

For identification we just need to know all the features of earthworm, for this we have to observe earthworms carefully and taking good closer pictures would help.

What are the probable species Diksha have in her earthworm culture ?
A. If it is reddish brown on the one part, whereas whitish on the other. It is also bulgy in the end then it’s lumbricus terrestris.
B. If the saddle colour is similar to the rest of the body. It is shorter and narrower then it’s Eisenia fetida.
C. If the saddle colour is different from the rest of the body and it is long and broad then it’s Eisenia Veneta.

I know many other collaborators would also like to join us in identification of their earthworm species…
Come let’s join hands and make it happen!
@Misbah @Diksha @Theertha @Abhi0703 @iram and other earthworm collaborators

My tinke moments are:
I didn’t know that earthworms are hermaphrodites and they have so many different species.

My TINKE moments were :-
I didn’t knew earthworms belong to such different species and they can be identified MORPHOLOGICALLY…