Journey of Chlorohydra from HBCSE to Elphinstone College, Mumbai 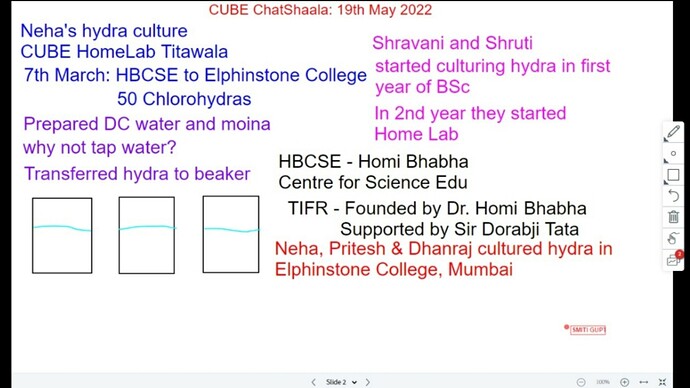 IMG_20220523_0246401072×604 164 KB
Chlorohydra a small model organism for the study of regeneration was bought to Elphinstone College by our seniors Shruti and Shravani from HBCSE on 7th March. HBCSE is Homi Bhabha Centre for Science Education which is based on the name of Dr. Homi Bhabha, Father of Indian nuclear programme. He received Padma Bhushan in 1954 and FRS that is fellow of the royal society awards along with Adams prize. He was the founding director of TIFR which is supported by Sir Dorabji Tata Trust and then HBCSE was established under TIFR, later in 1974

We discussed this because Neha was curious to know how work we do or HBCSE is related to Dr. Homi Bhabha although he was from a different field that didn’t had biology.

Then back to Chlorohydra, before it arrived we had DC water ready. The question was, why not use tap water? So Shruti and Shravani tried doing it with tap water when they were in FY but Hydra didn’t survive 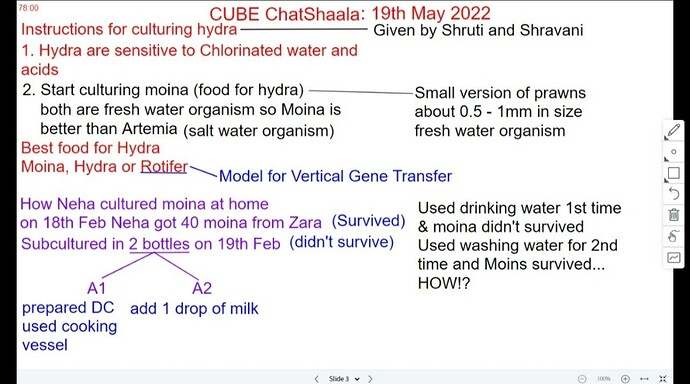 Best food for Hydra
Moina, Artemia or Rotifer.
Rotifer is a model for Horizontal Gene Tranfer

We discussed how I cultured 40 moina at my Home Lab in Titwala, that I got on 18th Feb from Zahra

I used drinking water for 1st attempt and moina didn’t survived then I used washing water for 2nd time and Moina survived.

Question I currently have for @Neha2 is that… Why moina didn’t survive in drinking water but did survive in washing water?