Cubists are trying to study the fungus which is causes soft rot disease in Ginger.
Today an idea came to use boiled potato as a medium to culture fungal soft rot of ginger.
Koch postulate came into discussion in the context that all the diseases have a causative agent.
Koch showed the relationship between a microbe and a diseases like in TB and cholera both are ascribed to bacteria.
We can use the postulates to study that Fungus of a particular species is responsible for causing soft rot in ginger. 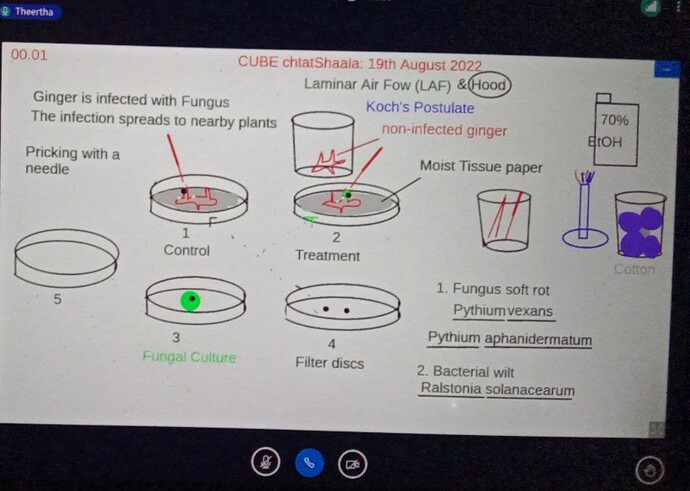 The question will address whether the soft rot type disease is caused by fungus or by some other microbe like bacteria.

We read the Koch’s postulate which says, Koch's postulates (/ˈkɔːx/) are four criteria designed to establish a causal relationship between a microbe and a disease. The postulates were formulated by Robert Koch and Friedrich Loeffler in 1884, based on earlier concepts described by Jakob Henle, and refined and published by Koch in 1890. Koch applied the postulates to describe the etiology of cholera and tuberculosis, both of which are now ascribed to bacteria. The postulates have been controversially generalized to other diseases. M Koch'...

We discussed that the same three points can be followed for Fungal soft rot in Ginger.