The picture represents diagram on reflex action being discussed in today’s Chatshaala, the question arrived how do we sense touch, for e.g., a touch of an hot object, for understanding this we discussed what is a neuron as seen in the picture, there are two neurons, one for sensing (called as sensory neuron) and another for movement (motor neuron). The question further was how do signal transmits from one to another neuron? Himanshu explained about gap between two neurons, and neurotransmitters released between neurons which transfer the signal, from sensory neuron to motor neuron which causes the muscles to move after getting touch by an hot object.
This process of reflex takes places across spinal cord, hence called as reflex action and doesn’t need involvement of brain.

Several concepts of neuronal structure, how signals are transmitted across neuron were discussed in the session making a small example of touch as an entry point to understand concepts of neuroscience. 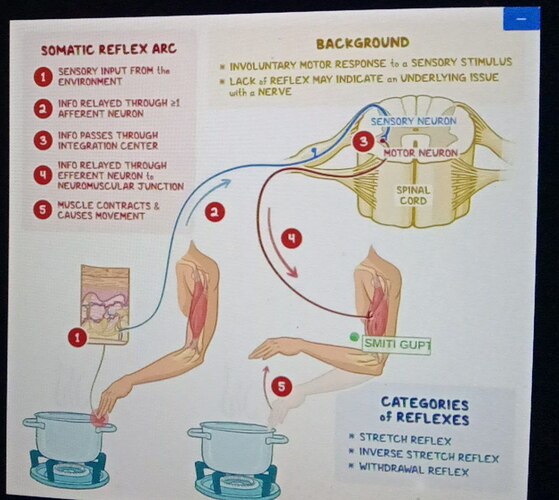 How about listing common misconceptions while we deal with nervous system and Neuroscience? @jaikishan @Himanshu @Abhi0703 @Theertha @KiranyadavR and others.
Bhagwati and Har Har Mahadev had opposite views on the role of brain in reflex action.
Let’s make a list of common misconceptions.

The most common misconceptions found during the Chatshala discussions were:

Neuron is an individual specialized cell which transmits the information through chemical and electrical signals. And information is passed from sensory neuron to motor neuron in the spinal cord through a gap called synapse via neurotransmitters.

Neuroscience has intimate connection with Electronics, Communication, and Computation. Harvard has an online 3 Part course. As a student of electrical engineering, computation, and computer networks, I audited Part-1 The Electrical Properties of the Neuron, took Part-2 Neurons and Networks but yet to jump into Part-3 The Brain. Hope some of you will jump into the Neuroscience course. Let us try some experiments. For example, my conjecture is that Maradonna had trained himself to embed football tactics into Reflex action. harvardx neuroscience