On 20th May 2022, there was small amount of Rainfall from morning 7 am to about 11.30 am. I found flies near the light and they are numerous with very fast movement These flies appear during first Rainfall. Villagers say that the appear only during First Rainfall. Later on when searched through google I found out they are called as Flying Termites
Location-Sindhudurg,Maharashtra
Time-8:10 pm
Data collector-Pritesh
See the Video of Flying Termites (CLICK HERE) 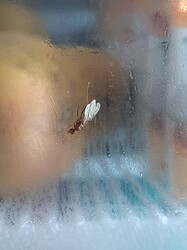 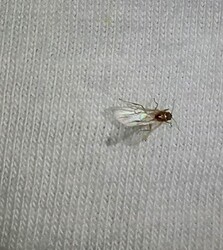 Termites life cycle is Scientifically known as Hemimetabolus life cycle
Hemimetabolous - having no pupal stage in the transition from larva to adult.

The termite’s life cycle can result in three different types of termite or caste types. The three types consist of
-reproductive workers and soldiers

Once a termite egg amongst countless thousands of others hatches, it is then called termite larva or larvae. The larva can become one of the three castes:
worker, soldier, or reproductive termite.

The larva then molts until it reaches maturity, which usually takes three molts. The larva can become a worker or soldier and its life cycle is over until it dies. The larva also could become a reproductive alate or secondary reproductive , where it goes on to reproduce and become a king or queen termite for another colony. The queen has the longest life, spanning on average from 25 years. The other types of termite’s life span vary from 12 to 24 months.
Molt- shed old feathers, hair, or skin to make way for a new growth.
Alate -have wings or Winglike appendages.

The stages of development are: Egg → Nymph → Adult (which can be secondary reproductive, worker, or soldier) 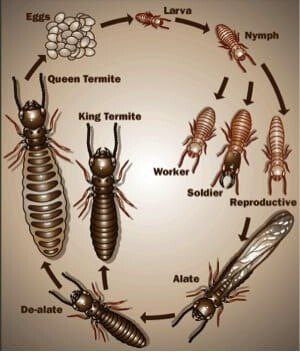 -Termites have six legs
-Termites have straight pointing antennas
-Termites have large heads with no distinct body segmentation more ribbed texture.
-Termites are pale white to a pale yellow
-A group of termites can be darker colored, much like most species of ant.
-The difference is that the reproductive adult termite’s pairs of wings are the same size, while the flying ant’s wings are not.
-The presence of termites in the house can be determined by their wood colored pellet fecal remains.

QUESTIONS
Where are the present whole year?
Why we only find them after First Rainfall?

Where are the present whole year?
Why we only find them after First Rainfall?

That’s a good question @Parab96k1! Well, if u look at the video all the termites have wings and in the life cycle there is only one stage where they have wings and it’s called alate

So when I search alate on google, the first that appeared was

Information on termite alates or winged termite swarmers. Swarmer termites near your home is a sign that a colony has been flourishing nearby. Learn more.

Which says that “An Alate is a Winged Termite Swarmer”

Termites with wings (also called swarmers or alates) are reproductives that leave the nest to start new colonies. Swarmers are not immediately produced in a colony; it can take up to four years for a colony to begin developing swarmers.

Also on the same site you will get the answer to your question as it talks about relation in between termites and rainfall. According to which, after rainfalls and showers, we may see swarms of winged termites, called alates. Since termites need moist soil to thrive, newly dampened ground is an environmental cue for alates to begin their mating process. Once the male and female alates pair off, they shed their wings and burrow underground to begin their own nests. Swarming seasons vary based on region.

Termites need specific amounts of heat and moisture to survive so be on the lookout for water damage in your home. Read about termites with help from Orkin.

Are this termites related to ants, if no then why do we reffer to them as white ant sometimes?

Termites were once classified in a separate order from cockroaches, but recent phylogenetic studies indicate that they evolved from cockroaches. While termites are called whiteants and like ants have caste system of workers, soldiers, queen, they are not ants, and are not closely related to ants. wikipedia