naYanaScribe - The new way of writing

Our project aimed to build on the foundations for a universal phonetic script naYana, already laid down by various collaborators and interns at the gnowledge lab, that can be exploited to inscribe any language. With IPA serving as a mediator, we have extended the mapping for different phonemes to unique glyphs. The script not only has easy-to-draw and straightforward glyphs but is also unique in the sense that no glyphs and their transformations(mirror images and rotations) are ever repeated in it. Read more about the script here
The project not only has extended the naYana script to accommodate more IPA characters than was possible earlier, focussing majorly on the inclusion of Hindi in the script but has gone a step further for its easy adoption. Download the otf font
The project has recognized that there might be a slight hesitation in learning a new script from scratch even after having many features that give naYana an edge over other scripts. Also, since naYana is nothing but IPA at its base, the lack of an input mechanism was a tough challenge, where most of the people have access to just Latin keyboards.
The project has thus delivered two solutions for solving this challenge - a keyman keyboard and an interactive webpage integrated with a JS dictionary mapped to standard Latin keyboards. While using a keyman keyboard can enhance the number of use-cases, the option of using a JS page comes with much wider accessibility.
The project has also successfully delivered a browser plugin for Google Chrome and Mozilla Firefox to transliterate complete web pages in naYana, which was the best route for making available large pieces of text in naYana script without generating content from scratch. The approach even helps in wiring the naYana glyphs with familiar scripts in the user’s mind because of an easy toggle mechanism.
We hope that this project will be able to give enough propulsion to the naYana script, its development, and its adoption that soon it will be recognized by large audiences far and wide.

We have backed the complete project with extensive documentation and version control softwares so that anyone interested can trace back the roots of our work, if interested to do so. We recommend to refer to the project report for getting a comprehensive understanding of the current implementation, and will be more than happy to help if there are issues that still persist. 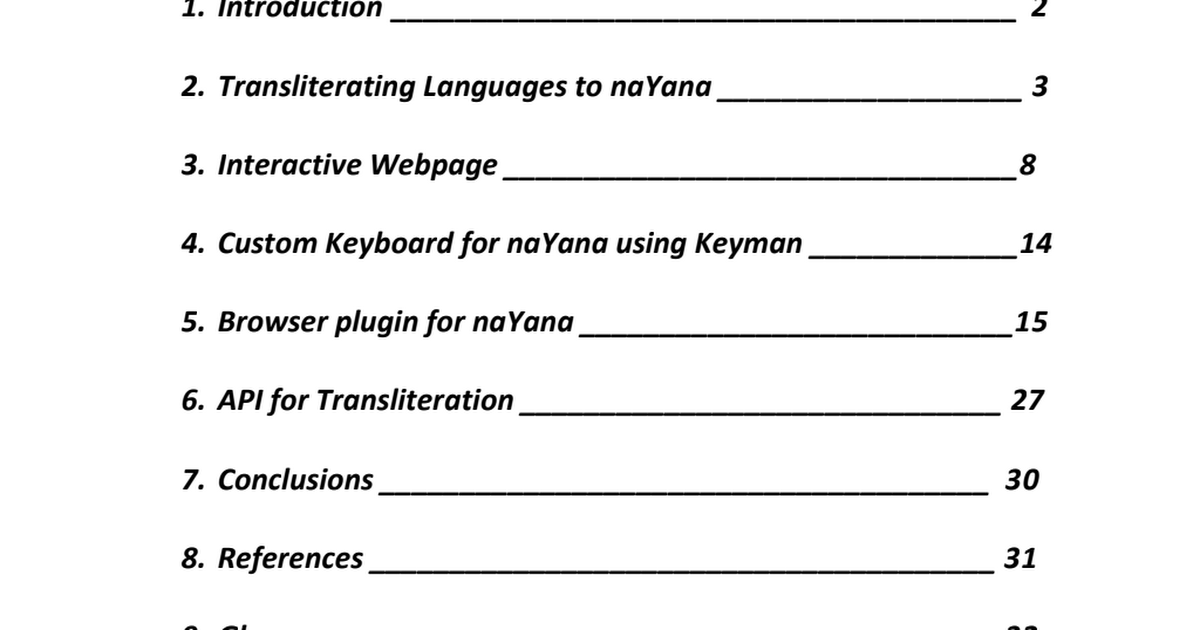 I tried the interactive web page. I think in the log it is good to keep the latest item on the top, instead of at the bottom of the log list.

Thank you for your valuable input sir. We have updated the code so the latest entries now appear at the top.

While typing for ‘La’ as in sasikaLa, the keyman did not allow me to type capital L. Is this not mapped?

Hindi does not need it, but marati and telugu need them. the glyph needs a dot in the middle of the omega character used for la to get La

Another feedback on input method: Y is allowed, but not small letter y. this will only increase more effort to get @ character. You must have had a reason for preventing this, can you elaborate?