Nothing in Biology makes sense Except in the light of Evolution:Possible model system that can be linked to the evolution for ISEB conference were discussed 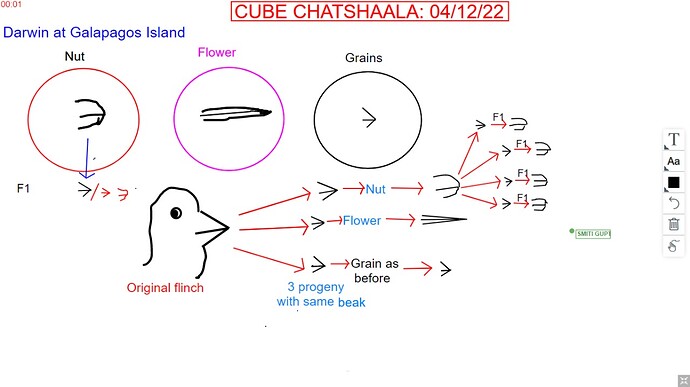 Discussion was started with a question by @Smiti

How exactly change in Phenotype cause change in genotype

As per the discussion;

There is a Normal finch with V shaped beak will produce 3 baby finches with same beak as parents .

whenever the V shaped finches reaches to a island( Nut as a food) it changes to V shape to U shape !? 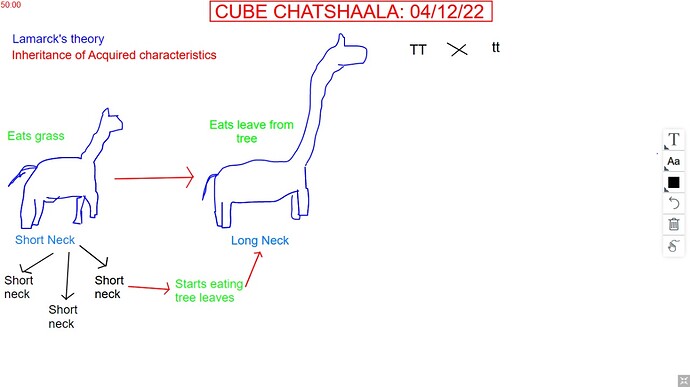 V shaped finches changes its beak into U ,when they are getting nut as a food .

According @Seema CUBE this will repeat .

But some point of view that may correct !!!

But there is something happening with in a period of time then U shaped finch will resulting into U shaped progeny only .

We heard with Lamarck theory about Inheritance of acquired character

@Seema CUBE said this theory was not accepted .

this lamarck theory of acquired character got rejected .

So now the question is " How this change is happening" !? 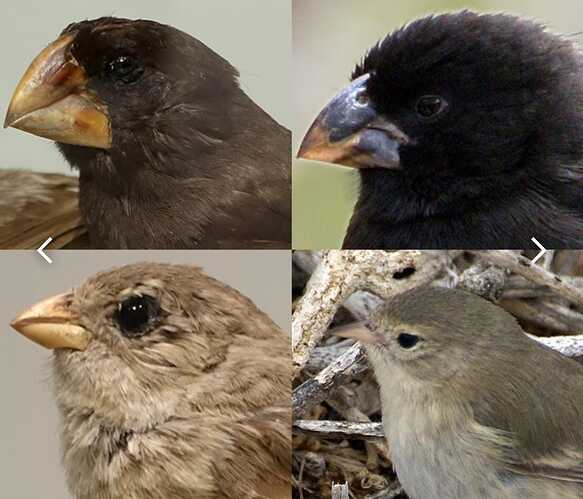 Seen here is adapted radiation of finch A. (Geospiza magnirostris) into three other species of finches found on the Galapagos Islands. Due to the absence of other species of birds, the finches adapted to new niches. The finches’ beaks and bodies changed allowing them to eat certain types of foods such as nuts, fruits, and insects. Geospiza Camarhynchus Platyspiza Certhidea Pinaroloxias Darwin's finches (also known as the Galápagos finches) are a group of about 18 species of passerine birds. They are well known for their remarkable diversity in beak form and function. They are often classified as the subfamily Geospizinae or tribe Geospizini. They belong to the tanager family and are not closely related to the true finches. The closest known relative of the Galápagos finches is the South American Tiaris obscurus. They w... 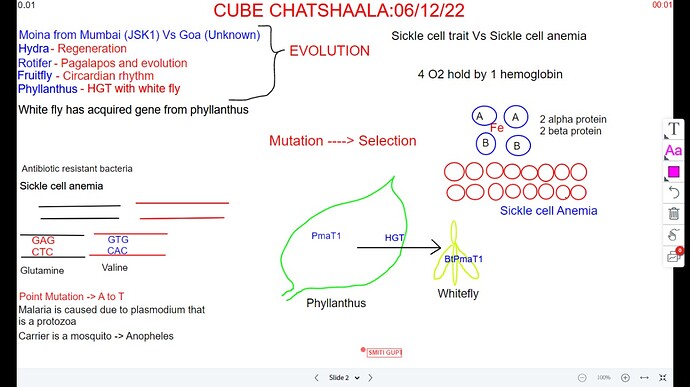 Why only whitefly can do this ? How does it actually occur ? Why is it evident now in today’s scenario? How can we connect whitefly to evolution?

To answer the questions we need to understand why these changes occur?

One possible reason is due to mutation 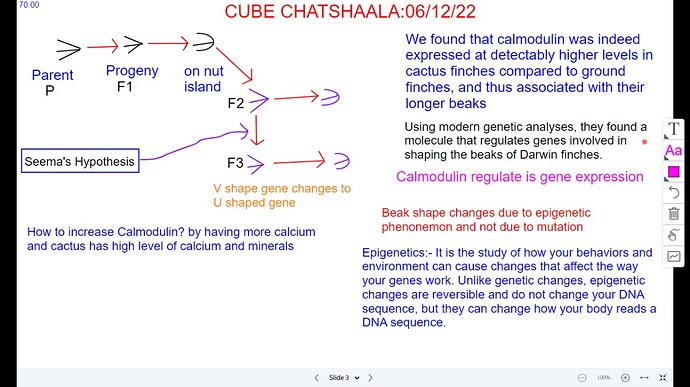 When they start reproducing, their progeny will have v shaped beak but eventually as they start eating nuts, their beak shape will also change

Coming back to Darwin’s finches …how do they change beak shape ?

In finches feeding on cactus fruit had long beaks than ground finches,
Here Calmodulin was expressed are high level.

Epigenetic phenomenon is due to behavioural and environment change :

Incase of sickle cell anaemia , it is due to environment ie malarial infection is prevented in people living in tropical regions by mutation resulting in Sickle RBC
(Summary on 6/12/2022 by @Ichha )

To protect from malaria ,natural selection act as way in which increasing the sickel cell trait in a population .There by protect people from malaria .

But Still how the natural selection occured !?

So this could be spontaneous mutation !!!

If sickel cell anemia is prominent due to mutation then how the Darwin finches got different path of evolution !?Like Ca- calmodulin concentration depending gene regulation !!! 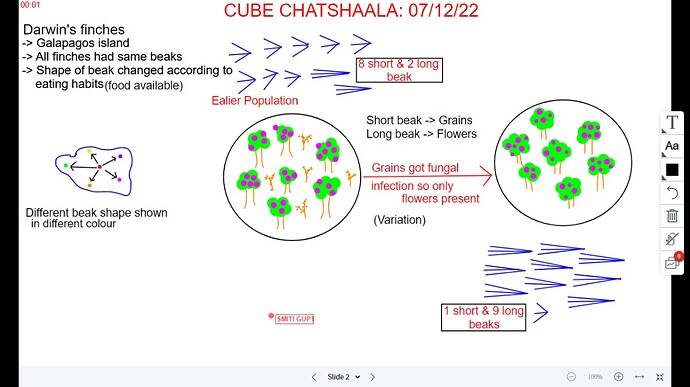 Today we had an interesting discussion started with Darwin finches…

We discussed that Darwin observed birds with the different beak shape on the same Island. ( Galopogas)

The major question that got cleared today was,

Why the beak shape changed!!?
To address this question let us consider that there’s population wherein there were majority of birds with short beak which fed mainly on grain…

Now, the natural selection comes into picture…, Wherein due to fungal infection the grain producing plants die and flower

producing plants remain on the island…

So due to this those 2 out of 8 will survive , grow, and reproduce and give rise to more number of long beak shaped birds & others which were short beak will move to another island or get extinct in that island… 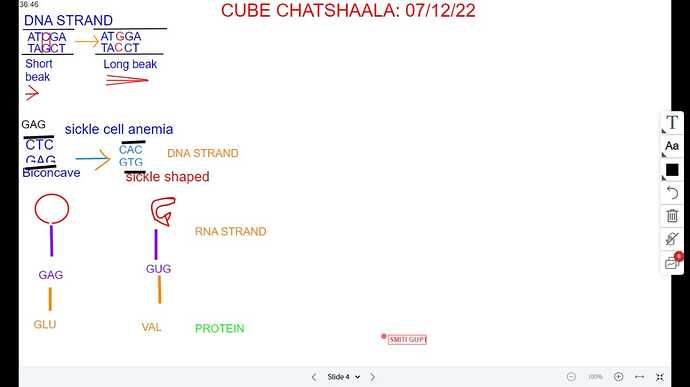 HOW SICKLE CELL ANEMIA CAN BE RELATED TO DARWIN FINCHES?

What’s the difference between Glumatic acid and Valine that results in changes in shape of RBC!!
(7/12/2022 summary by @_Seema_11 ) 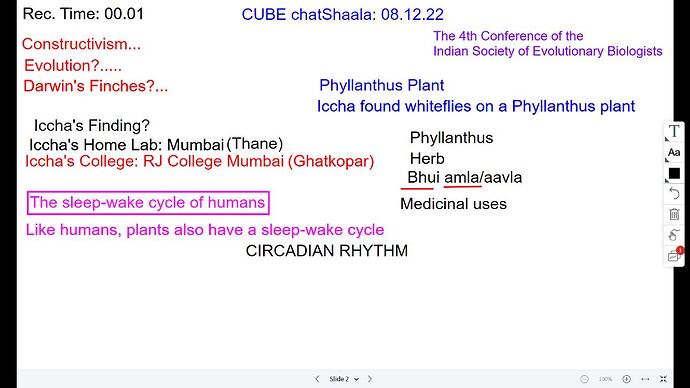 Nothing in biology makes sense expect in the light of evolution

How evolution is related to icchas work on Whitefly !!!

@Ichha from RJ college is working on Phyllanthus .

So what is a Phyllanthus !!

Phyllanthus is a plant which is close related to gooseberry plant .

Both are under the same family !?

Yes but Gooseberry​:shamrock: plant is a tree while Phyllanthus that cubists are working on is a small herb .

@Shraddha describes about the "Sleep- wake cycle in Phyllanthus* .Like human beings, we sleep at night wake up at morning .

Is this circardian rhythm seen ( visible

Not all plants ,but Phyllanthus ,Tamarind ,touch me not etc. showing this rhythm associated with their leaves.

Like leaves opening at day and closing at night . 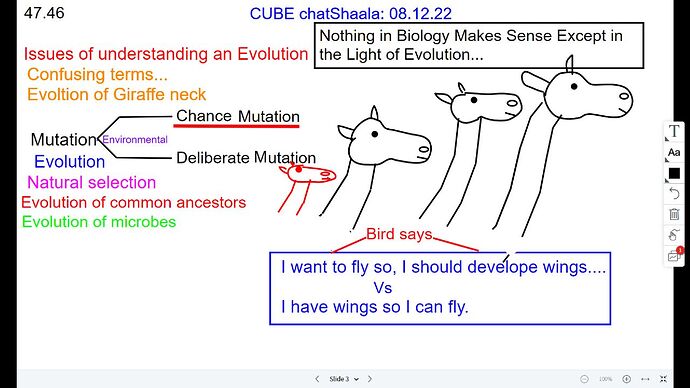 I want to fly ,so i should develop wings Vs i have wings so i can fly​:eagle:

Issues of understanding in Evolution :

@adithya joshi explains about the confusing terms in evolution .

Which include Mutation,Natural selection and evolution.

@Aditya Joshi @Khushi made a interesting discussion starting with a quote ""I want to fly ,so i should develop wings Vs i have wings so i can fly ""

But had a comment that " Do we have a proof of short neck jirafee ,so why not only long neck girafee were exist !!!

Later both are came at a single point where all these organisms may arise from a single
common ancestral . 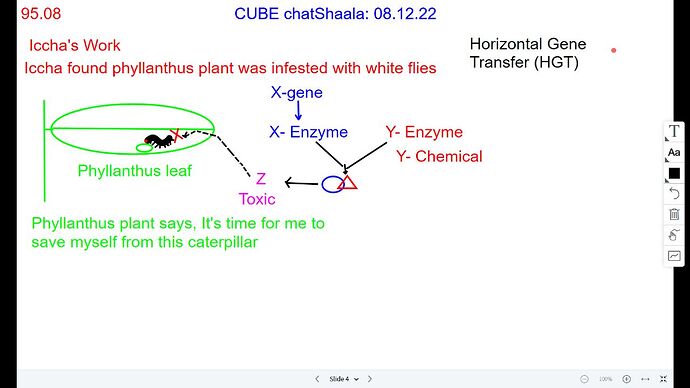 What will happens ,if Suppose caterpillar acquiring a detoxifying gene from a plant ,That can detoxify the Phenolic glucoside produced by plant !!

How this mechanism can possible!!!

How can plant gene will acquired by caterpillar !!!

Can we think of horizontal gene transfer !?

will this gene transfer occured with the help of virus or bacteria !?

Do transformation have any role !! 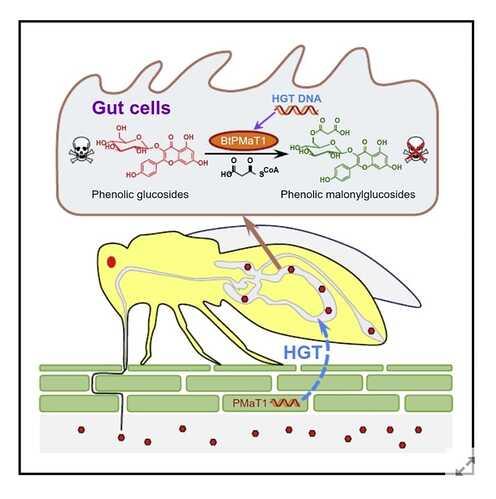 take place later the plant detoxifying gene will incorporated to viral genome .when virus attacking to caterpillar “do that gene transferred to caterpillar” !!!

First known horizontal gene transfer between in plant and a Whitefly​:shamrock:

Plant Producing a Phenolic glucosides which is toxic to Whitefly .

This was thing i

tried to explain,but i forgot to mention about Phenolic glucoside. 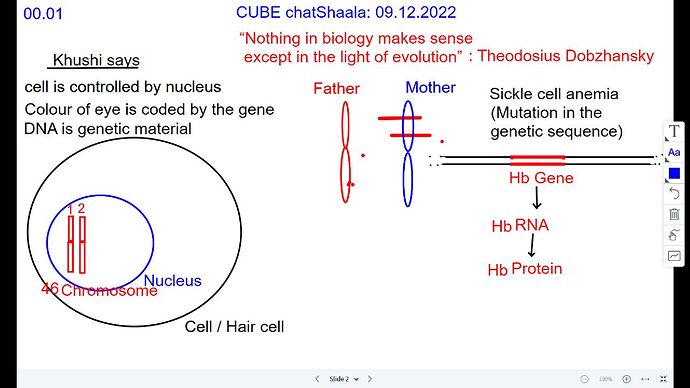 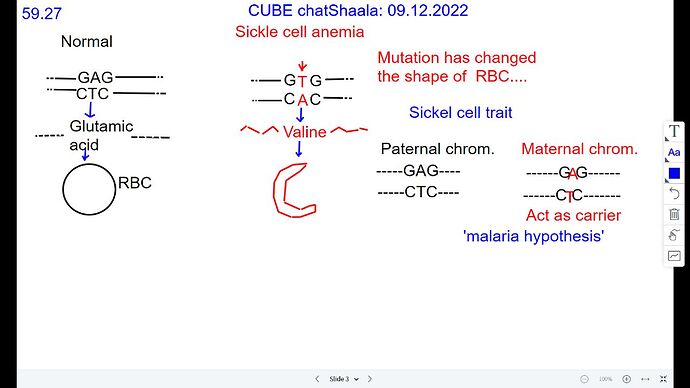 Haldane hypothesized that these disorders had become common in these regions because natural selection had acted to increase the prevalence of traits that protect individuals from malaria. Just a few years later, Haldane’s so-called “malaria hypothesis” was confirmed by researcher A. C. Allison, who demonstrated that the geographical distribution of the sickle-cell mutation in the beta hemoglobin gene (HBB) was limited to Africa and correlated with malaria endemicity. Allison further noted that individuals who carried the sickle-cell trait were resistant to malaria (Allison, 1954).
https://www.nature.com/scitable/topicpage/natural-selection-uncovering-mechanisms-of-evolutionary-adaptation-34539/