Shaurya from DSC college performed a Continuous dark experiment on his Homelab.

Following was the Writeup written by Shaurya . 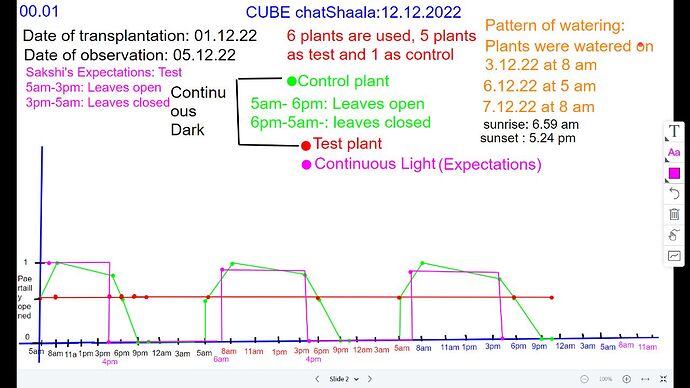 On 1st December 6 phyllanthus plants which were growing next to each other were transplanted in different cups at 10 am.

In the morning
These six plants were kept under control condition that is natural setting for 55 hours.

This was done so that the plant could recover from the transplant shock that it might have received during transplantation.

No water was provided during these 55 hours as the soil was still moist.

After 55 hrs i.e On 3/11/22 at 6 pm the plants were watered And five of them were put in test condition that is complete darkness in a cardboard box and one plant in the controlled condition.

(For more reliable result one should use equal number of plants for both test and control condition.)

The observation began after the plants were kept in test condition for more than 24 hrs (precisely 35 hrs)
(Even in darkness before 5 am leaves were open thus my assumption was that the leaves will remain open in darkness.)

For test the result was same throughout the day i.e leaves were partially open
Where as the plant in control condition showed variation.

For the next next two.days the results were same for both test and control plant
(I expected the leaves to be open in test condition as the leaves had started opening even when it was dark…i.e 5am)

When plotting the graph of this …we found that the leaves of plants in test condition were constantly opened partially (which is marked with red line) whereas the one in control condition, the plants showed a sleep wake cycle (circadian rhythm) marked in green line

Exposure to Artificial Light at Night and the Consequences for Flora, Fauna, and Ecosystems. The present review draws together wide-ranging studies performed over the last decades that catalogue the effects of artificial-light-at-night (ALAN) upon living species and their environment. Exposure to Artificial Light at Night and the Consequences for Flora, Fauna,...

The present review draws together wide-ranging studies performed over the last decades that catalogue the effects of artificial-light-at-night (ALAN) upon living species and their environment. We provide an overview of the tremendous variety of...

“Urban environments can serve as natural laboratories to study responses of plants to changing climate,” he said.