25 CUBists from 25 centres joined the webinar. 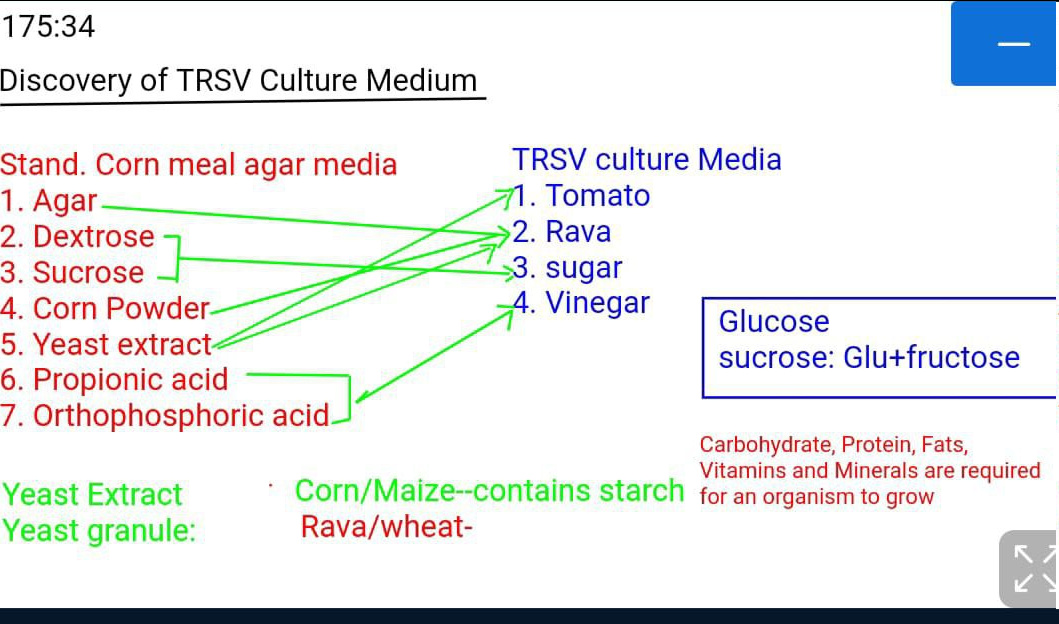 Whiteboard screenshot ( 2nd October 2020 ) CUBE CHATSHAALA, Story of TRSV CULTURE MEDIUM. … can we have a brief summary of discussion… 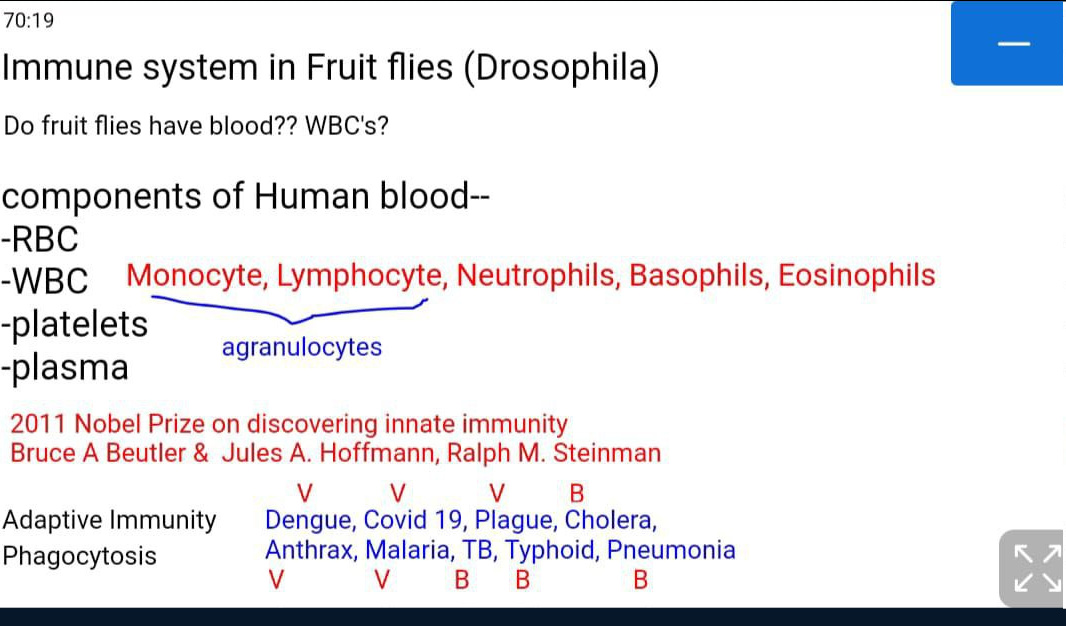 2011 Nobel Prize was awarded to Bruce A. Beutler, Jules A. Hoffman & Ralph M. Steinmann for the discovery of Innate immunity in Fruit flies(Drosophila)… Do fruit flies have Blood??? If they have Body Fluid so So do this fluid have Cells or which type of cells???.. 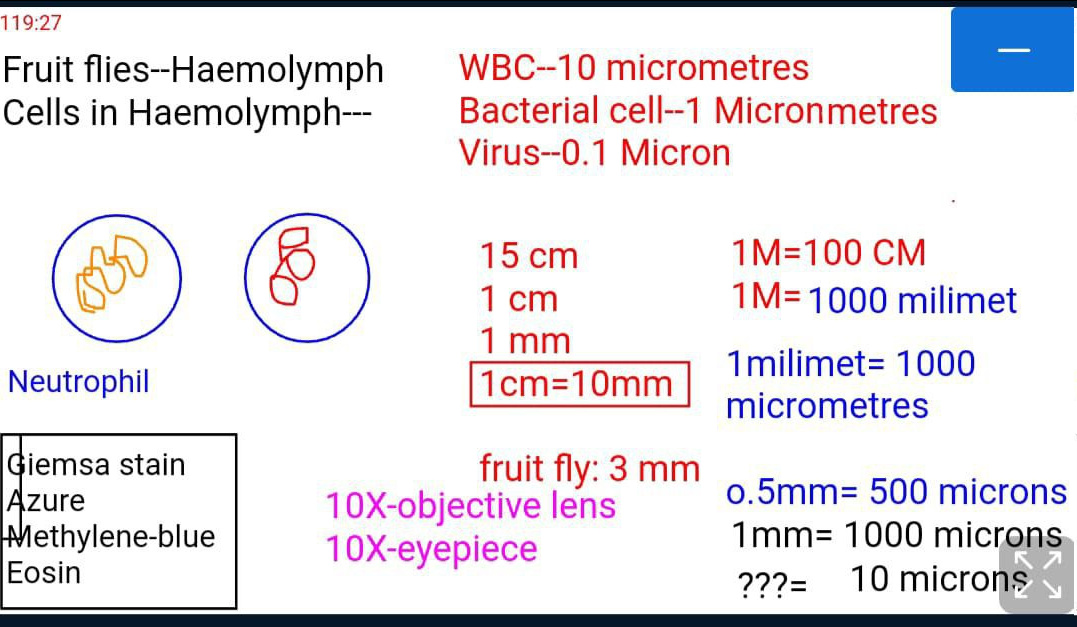 WBC (size of wbc’s is 10 Microns) but do we really understand the micron??? How do we measure it …Which are the phagocytic cells in the hemolymph of the Fruitfly?
And how easy for us to visualize those cells?
Good to see an attempt at functionally replacing constituents of Standard Cornmeal Medium with alternatives available at Homes!

Summary of Discussion by @drishtantmkawale
We have several components in the Standard Medium that make up for the nutrients such as Carbs, Proteins, Fats, Vitamins and Minerals that are required for an organism. We saw that Tomato and Rava from the TRSV medium act as more than one nutrient source for the fruitflies! Whereas in the Standard Medium, we have individual components making up for the nutrients.

I can see that in the screenshot, at the bottom there are diseases listed, above and below which there is V and B written. What is that for?
Another Nobel Prize in the name of fruitflies seen!
No, as fruitflies are Arthropods, they do not have blood. Instead, they have haemolymph.

‘An arthropod’s primary internal cavity is a haemocoel, which accommodates its internal organs, and through which its haemolymph – analogue of blood – circulates…’

Condylipoda Latreille, 1802 An arthropod (/ˈɑːrθrəpɒd/, from Greek ἄρθρον arthron, "joint" and πούς pous, "foot" (gen. ποδός)) is an invertebrate animal having an exoskeleton, a segmented body, and paired jointed appendages. Arthropods form the phylum Euarthropoda, which includes insects, arachnids, myriapods, and crustaceans. The term Arthropoda as originally proposed refers to a proposed grouping of Euarthropods and the phylum Onychophora. Arthropods are characterized by their jointed limbs...

The Nobel Prize in Physiology or Medicine 2011

1Bruce A. Beutler and Jules A. Hoffmann - for their discoveries concerning the activation of innate immunity. Ralph M. Steinman - for his discovery of the dendritic cell and its role in adaptive immunity

protect themselves from these microorganisms, multicellular organisms have evolved cellular and molecular defense mechanisms against infection. These defense mechanisms are known as immunity. At the beginning of an infection from viruses, bacteria early mechanisms such as expression of antimicrobial products, recognition of microorganisms by pattern‐recognition receptors (PRRs), and activation of phagocytic cells get engaged for eliminating pathogens. These early mechanisms are collectively known as innate immune systems.
microorganisms at later times during the course of an infection with specific receptors for microbial antigens. The T‐ and B‐lymphocytes are the cells responsible for the specific recognition of pathogenic antigens and together provide a more selective defense system, known as adaptive immunity, which provides a much better and faster response to the same pathogen during a second challenge.

Although insects lack an adaptive immune system, they do have a powerful innate immune system for fighting infections.
Hemolymph, the liquid that fills the hemocele, transports nutrients throughout the insect body and also contains several types of free‐moving cells or hemocytes. There are several types of hemocytes including granulocytes, plasmatocytes, spherulocytes, and oenocytoids. However, it is important to emphasize that not all these hemocyte types exist in all insect species . Hemocytes are essential for insect immunity, as shown in Drosophila melanogaster larvae where plasmatocytes, making up approximately 95% of circulating hemocytes, decrease in numbers during an infection Also, the genetic or mechanical elimination of phagocytic hemocytes in adult Drosophila leads to an increase in infection susceptibility from various bacteria 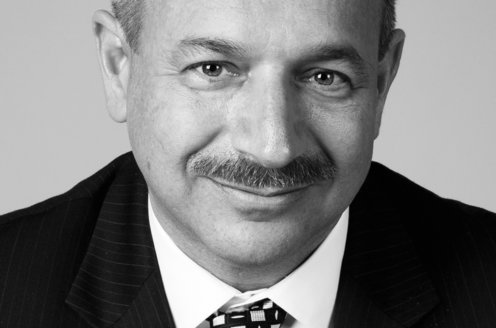 The Nobel Prize in Physiology or Medicine 2011

The Nobel Prize in Physiology or Medicine 2011 was divided, one half jointly to Bruce A. Beutler and Jules A. Hoffmann "for their discoveries concerning the activation of innate immunity" and the other half to Ralph M. Steinman "for his discovery of...