As we do it daily, CUBE ChatShaala will be starting at 5.30pm and as a continuation of it, from 8.30pm, there will be MangoMapping workshop 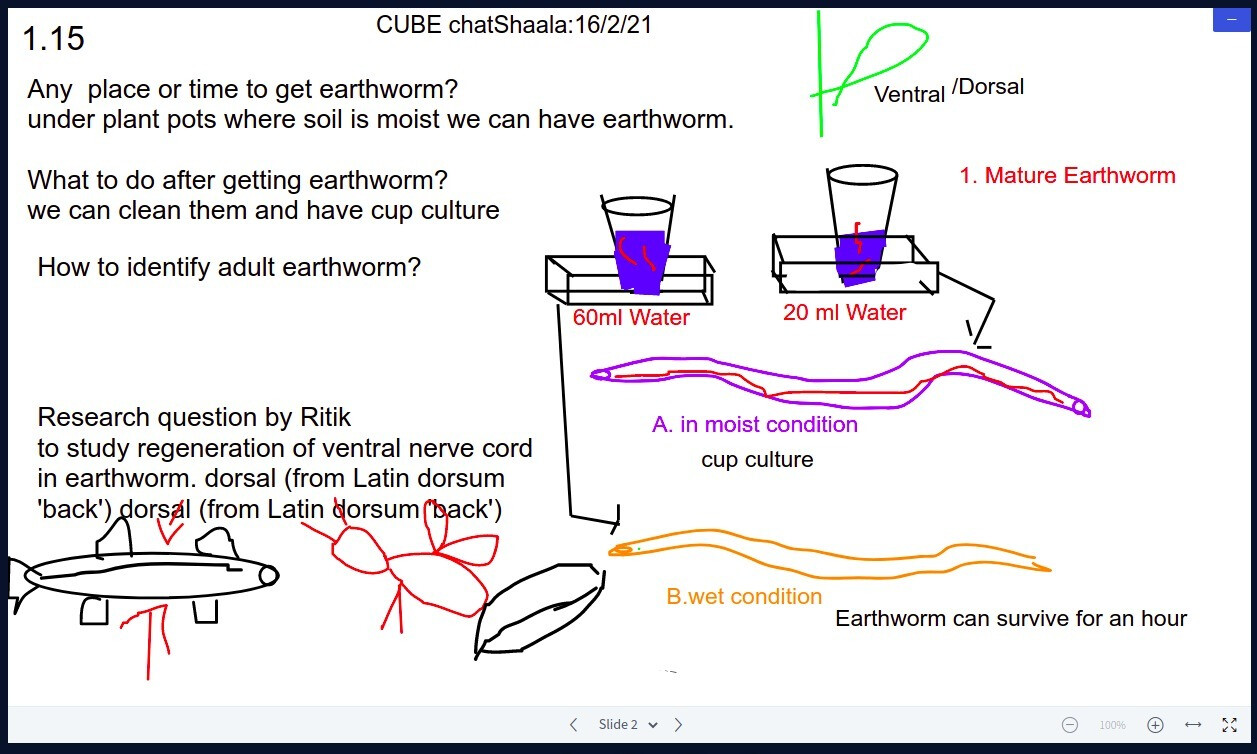 There was a research question by Ritik
: To study regeneration of ventral and dorsal nerve cords .

We also discussed the term ventral (front) and dorsal ( back) in earthworm, zebra fish and fruit fly. 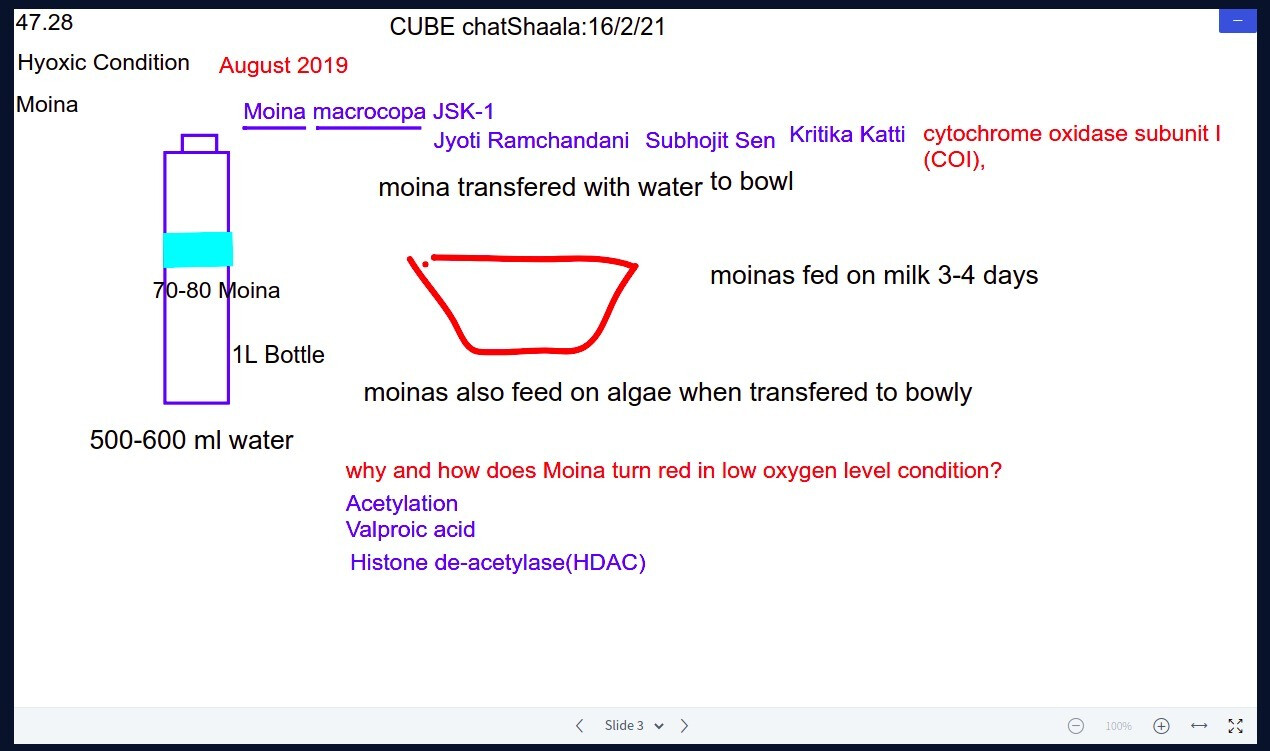 We also discussed about the Moina cultures. The objective to culture Moina is to get red condition in Moina in hypoxic condition which is an unfavorable condition or stress condition for Moina .

So, how the moina got the name Moina macrocopa JSK1 ? Moina macrocopa is the species from genus Moina and I
JSK1 each letter indicates the 1st letter of the scientists i.e Shital Bhanushali, Kritika Katti, Subhojit Sen and Jyoti Ramchandani (2018) and 1 is the cytochrome oxidase subunit 1 (CO1)

Algae is also found in the Moina culture and Moina is probably feeding on it also green colour is visible inside it. As algae is present in the container, it is maintaining oxygen level for Moina .

How Moina turn red in colour?
In the low level oxygen (hypoxia) , DNA unwind and the transcription occurs because acetylated histone helps to open chromatin fibres . In this process hemoglobin gene expression occurs and Moina turns red in colour. 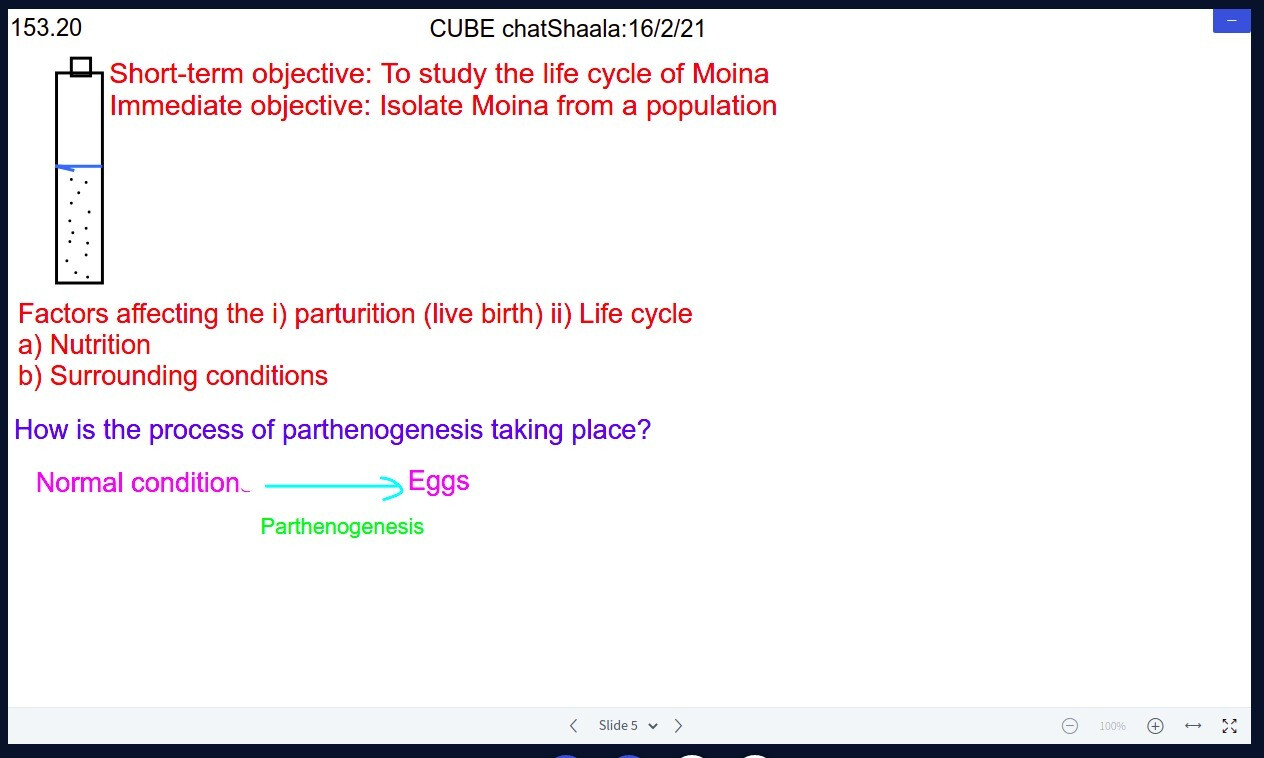 We also discussed , a single moina give birth to how many baby Moinas and how many times in its life time in what interval?
Moina get mature after 3 days and A single Moina can give birth to 2,3,4 to 22 baby Moinas at once and the next batch of babies can take time around a day . We also saw a video, in which Moina was giving birth to ~10 baby moinas . So the factors such as nutrition and surrounding condition can affect the pattern of reproduction of Moina .

Then the discussion shifted to the mango mapping. 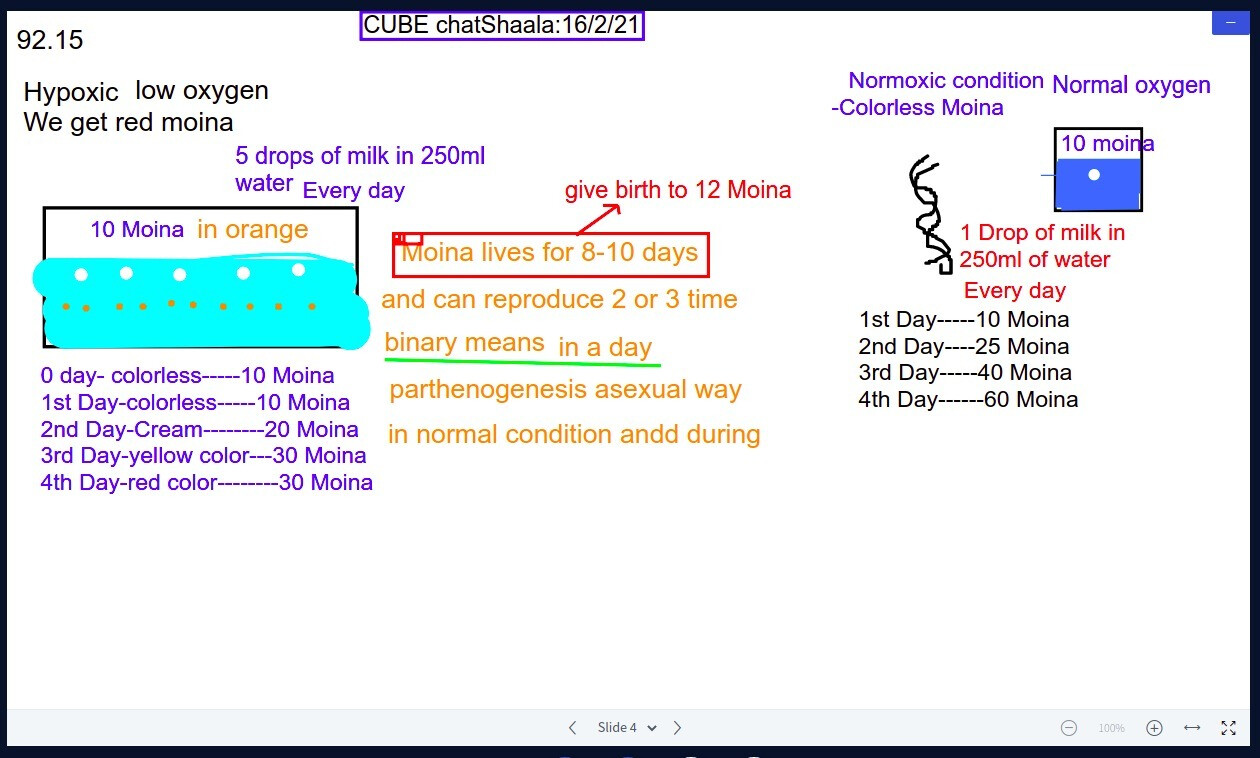 Here , both the female and male Moina which was produced either in normal condition or in stress condition both are diploid ( 2n chromosome number) and only haploid eggs are produced during the fertilisation which occurs between female egg and male sperm which ultimately forms the ephippia.

CUBE Meet Summary:16 Feb 2021
The discussion began with a search of model organism perfect for Ritik, and he was interested in earthworms. We then asked him question like where to find earthworms and when and how to raise them after capturing? Then we questioned him about his research question and he told that he wanted to study the regeneration of ventral nerve cord of earthworms and wanted to apply the same for treating organisms whose spinal cord gets damaged and are unable to perform normally then. After this the question arises what is dorsal and ventral in respect to organism like earthworm and fish and what can be dorsal and ventral with respect to leaf.
After this we went on discussing Rechel’s finding on moina. Moina cutured by rechel were moina macroscopa JSK1.and discussed how she cultured them with help of milk and algae. After this we discussed the hypoxic and normal conditions in moina. We found that moina lives for 8-10 days and can reproduce 2-3 times a day producing 2 moina each time. and we came to a interesting fact that during normal condition moina reproduce through parthenogenesis and produce female moina and during hypoxic condition they lay diploid eggs producing male moina.