Please click on the HBCSE Webinar above to join the CUBE ChatShaala
Timing:5.30 pm to 9.30 pm
Webinar will be recorded and recording link will be post in the same thread after the webinar.

Looking forward to your participation.
Thank

CUBE ChatShaala: 23rd Nov 2020
The discussion started with fruitflies in West Bengal.
CUBists from Garden High School Kalyani, WB and Kolkata, WB are trapping fruitflies using several baits.
@magpie in Kolkata says that the frequency/number of fruitflies coming towards the bait has decreased and that in Kalyani, the fruitflies are gathering in considerable numbers (~40 flies).
Why is there a change in the number of flies between two places that are just 65kms apart?
Temperature?

@magpie said that the weather in Kolkata has changed from 3-4days and it has become cool around.
If we talk about temperatures in the respective places;
Kolkata -Max:27’C Min:14’C
Kalyani -Max:27’C Min:13’C
https://www.accuweather.com/en/in/kolkata/206690/weather-forecast/206690
https://www.accuweather.com/en/in/kalyani/196709/weather-forecast/196709

Is it a drastic change? What if we try to focus on other parameters such as the tidiness of the surroundings, type of bait(s) used, location of bait, etc.
These are the variables that are giving us a different outcome(s) (maybe)! 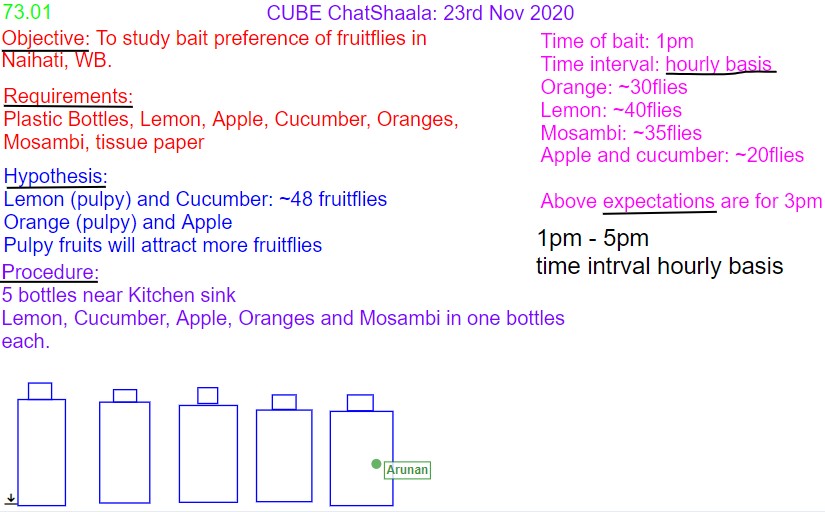 Sharanya from Naihati, WB was successful in observing fruitflies in some of the baits that were kept.
The baits that were kept; Lemon, Orange, Mosambi, Banana peels, Apple and Cucumber slices (Oh what a buffet!)
One of her observations was that pulpy fruits such as Lemon, Orange, Mosambi, Cucumber attracted more flies as compared to Banana peels and Apple.
Why that? What is the special thing that pulpy fruits have (that is absent in nonpulpy ones)?
Are they carbonated? If so, then will the fruitflies get attracted to any carbonated drinks/beverages😅?

To see if fruitflies really get attracted to pulpy fruits is large numbers, Sharanya designed an experiment that is depicted in the picture above. It is a self-explanatory slide.
Do ask questions for clarification and suggest improvements in the design! 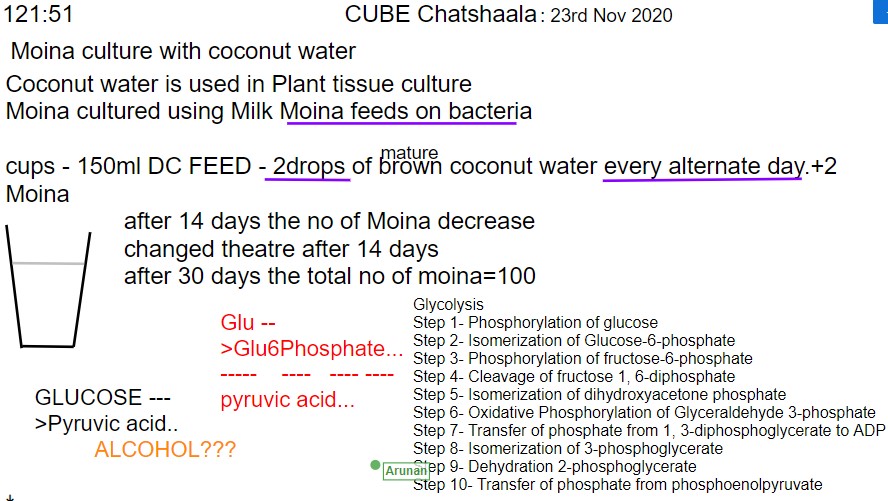 Ever heard of culturing Moina with coconut water?*
Yes! CUBist Abhijith Vinod from Kerala has been culturing/maintaining Moina by feeding them coconut water!
Isn’t it surprising?
Abhijith had tried this out of curiosity as he knew that coconut water is effective in Plant Tissue Culture (PTC), and it worked!

But he didn’t know on what are Moina exactly feeding on? In the conventional method of maintaining Moina in CUBE, we use milk (having carbs, fats, proteins, vitamins, minerals) as the feed for bacteria upon which Moina feed.
What happens when we add coconut water?
Here, mature coconut (brown) water is being used and not tender (green) coconut water.
If we apply the same theory (of milk and bacteria) here as well, there comes a question.
What in coconut water are the bacteria feeding on?

The Truth About Coconut Water

Kathleen Zelman, MPH, RD, weighs on in the health beneifts of coconut water.

1.3grams of sugar!! 1.3grams of carbs!! Carbohydrates are what the bacteria want (majorly) for energy!
Is it not? When we take any organism, it will need energy (in the form of ATP) to reproduce, to metabolise (degrade and synthesise).
Where is this energy coming from?
We talk about Glycolysis, Krebs cycle and Electron Transport Chain (ETC) if we want energy.
The former gives 2ATP molecules (on glucose breakdown) and the latter two give 36ATP molecules combined.

Also, we talk of fermentation by Yeast, fermenting bacteria.
What is fermentation? Is it not the breakdown of carbs into simple molecules that are further processed to give energy? If we take breakdown of Glucose (a monosaccharide), it undergoes Glycolysis (the breakdown of glucose)
And in the process, by-products such as ATP, acid, alcohol, carbon dioxide (effervescence) are given out.

Procedure for maintaining Moina by adding coconut water is described in the self-explanatory slide!

We also discussed how Glycolysis and Krebs Cycle are related?
The intermediary molecule pyruvic acid/pyruvate undergoes oxidative decarboxylation (removal of carbon dioxide as a result of oxidation reactions) to become Acetyl-CoA that becomes a reactant alongwith Oxaloacetate in the first step of Krebs cycle.

Why are we studying topics like these if we are leaving out the intermediary connections that occur in two different organelles altogether!
These crucial steps often get ignored in the longer race!

Models such as Fruitflies, Moina, Earthworms provide us context to study topics of the curriculum like these!
For a short while, we discussed the maintenance of Zebrafish (this time in detail).
Tejasree and other collaborators from Nellore, AP have been maintaining zebrafish in their institute.
Zebrafish eggs are fertilised externally!
While discussing, we came to know that zebrafishes eat their own eggs (if not separated).
Why do they eat their own eggs? Do they even know that these are eggs?
We often humanise such instances.
For them, it maybe just another thing in the water! Who knows?
To prevent the fish from eating the eggs, after egg-laying )and maybe fertilisation) is done, a nylon net is placed so that the fishes do not reach the eggs.

Tejasree also shared that they had brought fishes in their homelabs and due to some reasons, they didn’t survive.
They suspect that there maybe two reasons for this to happen;
i) fluctuation in pH ii) fluctuation in dissolved oxygen concentration.

If these are the reasons, how do the fishes survive in the freshwater bodies?
Zebrafishes are found in the Ganges, rivers of the east. Is it not a matter of concern there?
In fact, the fishes are prone to death in those conditions because if we see, human activities do prevail (in these rivers/freshwater bodies) that can cause a change in pH, dissolved oxygen and what not!?
This rules out both of the reasons.
What could be the reason(s)? Let’s discuss! 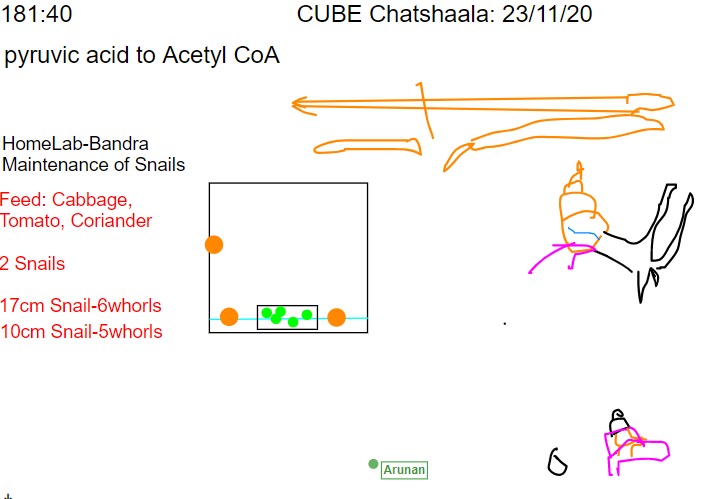 Later, we wriggled towards the Snail model system😅.
@saida786110 from Mumbai has been maintaining snails that are suspected to be giant (really giant) African land snails!
One of them in ~17cms (centimetres) long having 6whorls in its shell and the other one is ~10cms long having 5whorls.
The setup of maintenance is described in the slide.

If a newly hatched snail has two whorls in its shell, then we see that as the snail ages, the shell size as well as, the number of whorls increase gradually. How are new whorls added in the existing ones?
From which end do the whorls grow/get added? Distal (away from the body) or Proximal (close to the body) end?

In the end, we discussed a few brainstorming points on earthworm immunity.
Everyone, kindly add to it so that our group doesn’t remain silent!