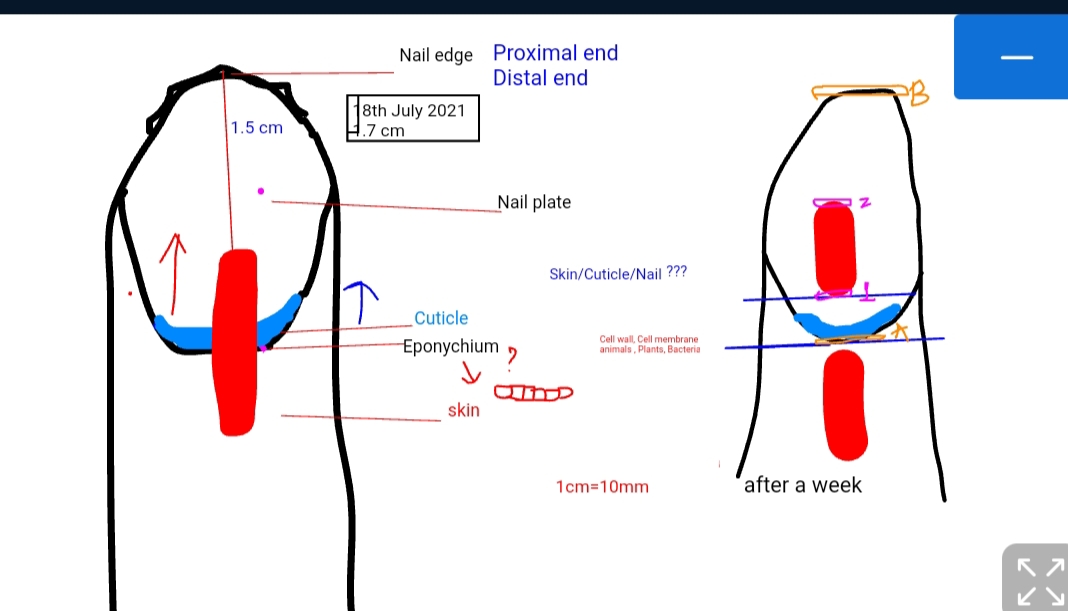 HOW TO MEASURE NAIL GROWTH?
STRUCTURE OF NAIL
[In puts from chat box - question and reference related to yesterday discussion of nail growth studies.]

Is cuticle similar to the skin… is it not present in all nails?
Is there cell wall in Finger ?
Do you have Lunula on all finger nails?
What is importance of cuticle?
Just look at your finger! SCIENCE AT FINGER TIP!
we have heard not all bacteria have a CAPSULE …is it True?
To protect it from dirt, water seepage within
Cell wall!??
Like plants having cuticle on leaves
So is it like cuticle covers the possible gap of skin-nail junction?
eponychium is the fold of skin cells that produces the cuticle.
Do we have cell walls?
What is the difference btw cell wall and cell membrane?
What is the function?
cell wall is made up of cellulosic proteins
In plants its of cellulose
N in microbes, its made of peptidoglycans
Peptidoglycan consist of peptides and sugar
Does all microbes have capsule
Bacterial cell has 3 layers
Cellulose is a polymer too
Glycocalyx , cell wall and a plasma membrane.
Glycocalyx is the outermost layer of a prokaryotic cell
Composed of?
It protects the cell And helps in adhesion
Is it a polymer of NAMA n NAGA
Glycocalyx is made up of polysaccharides
Yes NAM AND NAG
n acetylglucosamisne?
N - acetyl glucosamine
And n acetyl muramic acid
Which sugars?

•How to measure Weekly Growth of Nail of Males vs Females?
•Which age group will we consider, for male female nail growth
•Hypothesis? Female Nails Grow Faster than the Male Nails
•So males dont have hormones is it so
If the hormone is not at all present then how does nail grow in age group 45 and above people
•Can Males of the same age be CONTROL samples?

The glycocalyx, also known as the pericellular matrix, is a glycoprotein and glycolipid covering that surrounds the cell membranes of some bacteriahttps://en.wikipedia.org/wiki/Glycocalyx

he terms proximal (from Latin proximus ‘nearest’) and distal (from Latin distare ‘to stand away from’) are used to describe parts of a feature that are close to or distant from the main mass of the body, respectively.[30] Thus the upper arm in humans is proximal and the hand is distal.https://en.wikipedia.org/wiki/Anatomical_terms_of_location
The cuticle is the semi-circular layer of almost invisible dead skin cells that “ride out on” and cover the back of the visible nail plate while the eponychium is the fold of skin cells that produces the cuticle. A nail is a claw-like plate at the tip of the fingers and toes in most primates. Nails correspond to claws found in other animals. Fingernails and toenails are made of a tough protective protein called alpha-keratin, which is a polymer. Alpha-keratin is found in the hooves, hair, claws and horns of vertebrates. The nail consists of the nail plate, the nail matrix and the nail bed below it, and the grooves surrounding it. The matrix, sometimes called the matrix unguis, teratogenous membrane, nai...

“Rough” edge depends on how much work we do with our hands, like washing vessels !
The lunula (“small moon”) is the visible part of the matrix, the whitish crescent-shaped base of the visible nail.[citation needed] The lunula can best be seen in the thumb and may not be visible in the little finger.
I understand the part sir but not summarise correctly…