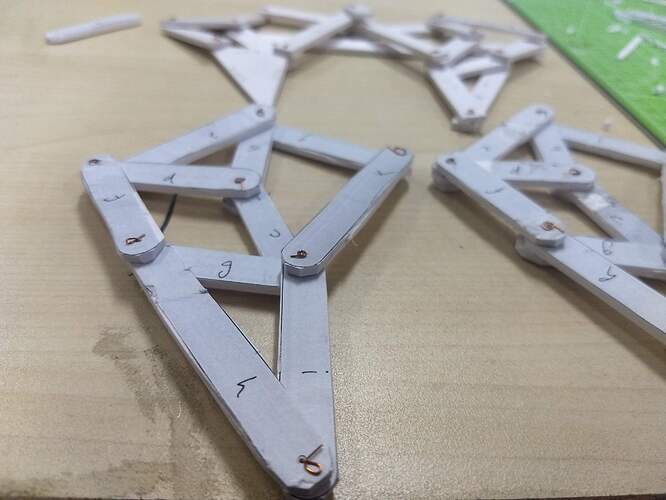 “The walls between art and engineering exist only in our minds.” -Theo Jansen

Theo Jansen has been creating strandbeest ( “beach beasts”) since 1990. These are moving kinetic structures that resemble walking animals or in simple words - wind-driven walking machines! The basic system is made using two triangles with two quadrilaterals along. Here is a video showing the evolution of strandbeest.

“I make skeletons that are able to walk on the wind. Over time, these skeletons have become increasingly better at surviving the elements such as storms and water and eventually I want to put these animals out in herds on the beaches, so they will live their own lives.”

So, how does Jansen’s linkage look like? You can explore the below link to know more.

Jansen's linkage is a planar leg mechanism designed by the kinetic sculptor Theo Jansen to generate a smooth walking motion. Jansen has used his mechanism in a variety of kinetic sculptures which are known as Strandbeesten (Dutch for "beach beasts"). Jansen's linkage bears artistic as well as mechanical merit for its simulation of organic walking motion using a simple rotary input. These leg mechanisms have applications in mobile robotics and in gait analysis. The central 'crank' link moves in c...

There are innumerable projects which are out in open-source made using this mechanism. However, as much magnificent and fascinating it looks in animation or while looking at various videos of other projects, it will be even awesome if one can attempt to make something leveraging the mechanism to give us a deeper sense of how does the mechanism works.

I along with Jude (@jtd) started to tinker around with the mechanism and here are some of the very preliminary attempts. Even though the project is work in progress ( we plan to make a small walking machine and then a larger one which a person can pedal), its movement captures the attention and imagination of people of all age groups! 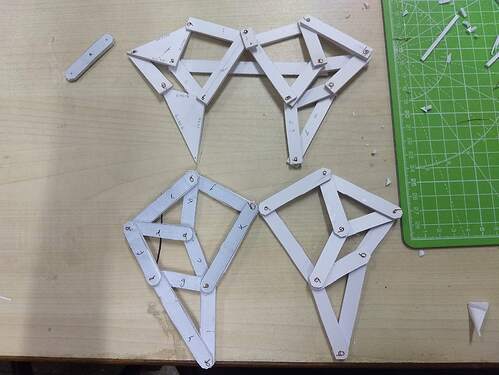 We really look forward to the community members sharing their ideas, designs and artifacts with us here and also taking action locally by showing it to more people around. This is definitely going to bring gleam in the eyes and smile on the faces once anyone gets a chance to enjoy the sheer joy of playing(making) the mechanism!

I’ve posted a discussion on the subject of vehicles here, and explored some reasons why the Jansen innovation is not ideal for a practical mobility device.

Jansen himself names his creations strandbeests (‘creatures who have evolved to live on the sea coast between high and low tide levels’) because his art helps to understand, or uses the paradigm of, the mechanisms and behaviour of living creatures.

The geometry of the Jansen design, as we saw in the construction of Adam Savage’s One Day Build, needs to be extremely precise, in order to deliver a working leg, whose foot describes a perfect circle.

However, tinkering with the help of precision laser cut components enables some modifications to be built in. For one, instead of describing a circle, a flattened oval can be used. Secondly, the axes of the oval can be made flexible, instead of fixed.

@ravi31 This is a DIY rope climber robot and I thought the mechanism is close to Strandbeast’s working.


There are competitions for rope creepers

With this mechanism the beast can crawl up a rope too, might be exploited for other applications as well.
3 Likes