Why Air horn and some Musical instruments have a curved shape? 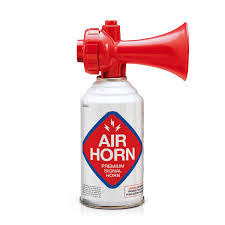 Today i thought why a air horn and some other musical instruments have a curved shape. So i did some research on google and Youtube and found the reason behind this. So let’s see the reason

Why Air horns and musical instruments have a curved shape

We will understand it with a very simple eg, So the jelly block represents a volume of air molecules, If a horn diaphragm hits the jello molecules at one end. We will see a chain reaction of Jello molecules crashing into each other, Until you see movement on the other side of the Jello block and this is where your eardrum is. So it moves back and forth at the same rate as the horn diaphragm because of all of these collisions of Jello molecules in between, This is called a pressure wave and it’s how sound travels through air and so if the horn diaphragm is hitting the air molecules at A high Frequency or very frequently our brain decodes that as a high pitch voice. But if the crashes are happening at a low frequency or less frequently then our brain decodes that as a low pitch
What it has to do with the curved shape

The Horn diaphragm is very solid and strong and it pushes against the air which doesn’t offer much resistance, It’s not very effective. So without The curvy horn portion as the diaphragm moves back and forth. It interfaces the air sort of like the image above. We can see the jello still moving on the opposite side but not just that much because the air is too thing and weak over this small area.

So to have a better interface with the air you put a big curvy shape right after the diaphragm. By doing this we can see that jello is moving back and forth more vigorously because the interface is so much better. Therefore sounds are louder with a curved horn not because you are amplifying the sound but because you are conserving the sound.
Hope You learned Something New!
Thanks And Have A Nice Day!

The loud speakers are also horn shaped. But thir speaker which is at the small side of horn is not very loud. It becomes loud when it is put in the horn.

You can place a speaker on the desk and play some sound. Note the volume.
Now take a piece of cardboard / foam board 3 times the dia of the speaker. Cut a hole equal 4 mm smaller than the speaker dia. Place the card board on the speaker. Now play some sound. What happens to the volume?
In audio terminology the cardboard is known as a baffle and is vitally important in shaping the sound characterisitics.
The curved, elongated shape of the air horn is made as such for an important reason. A wind instrument like the flute provides a nice clue.

A wind instrument like the flute provides a nice clue.

A flute will not be as loud as a trumpet or euphonium.

True. But is that due to the energy input or acoustic characteristics or both?
I dont have the faintest clue.
Here is a nice piece on flute physics.
https://newt.phys.unsw.edu.au/jw/fluteacoustics.html

The bell of the trumpet or mouth of a speaker horn act as a transformer, coupling energy to the air much more efficiently. The curved shape results in coupling different frequencies. The lower the frequency the large the required mouth. Thus high frequencies are radiated from the narrower portion and lows from the wider portion. Consequently horn speakers have very restricted low frequency performance.
Also a vibrating diaphragm - the speaker cone is producing a high-low pressure in front and the opposite at the rear. If we do not isolate these two out of phase pressure waves they will cancel out, resulting in very low volume. A flat baffle will have a wide angle of dispersal, ie a unit of energy is spread over a larger volume and hence would sound softer. The horn - a enclosed baffle - focuses the energy over a smaller radiating surface increasing the sound pressure in the direction of the horn mouth.