Why do we need Oxygen?

During the discussion we came to know that Moina requires oxygen, it produces more haemoglobin if oxygen level gets reduced.
So the question which came about was why do we need oxygen?

@anindita8820 explained that we need oxygen in production of ATP (Energy).
She explained several series of steps which take place to produce ATP.
Glucose is broken down to pyruvate in glycolysis, which is converted to acetyl-CoA.
Further acetyl-CoA enters Kreb cycle.
But question came from @Chitralekha mam where do we need Oxygen in this?
And why do we release CO2 during respiration?

Then further @Chitralekha helped to understand how number of C atoms gets reduced and comes out as CO2.
Same way, in pyruvate to Acetyl-CoA also one C atom comes out as CO2. Similarly in Kreb cycle, the 6 C compound gets converted to 5 C compound and CO2 is released.

Now the question came where is Oxygen getting used? @anindita8820 explained it gets utilized in Electron Transport Chain (ETC).

In ETC, @Chitralekha mam asked where are electrons coming from, how are they getting transported.
Electrons come from NADH. The electrons are accepted and protons are pushed out, creating potential difference across membrane of mitochondria which helps to rotate proton pump. In each step of ETC the ADP is converted to ATP using this proton pumping, ultimately oxygen accepts all electrons to produce water.

Oxygen is hence a final electron acceptor. If there is no oxygen, there is no proton pumping, and there is no ATP and no energy and organism may die. Therefore, oxygen helps in energy production.

Now we understood why bottle of @sakshiconsultant2002 is turbid and may be that’s why oxygen is not diffusing leading Moina to die. 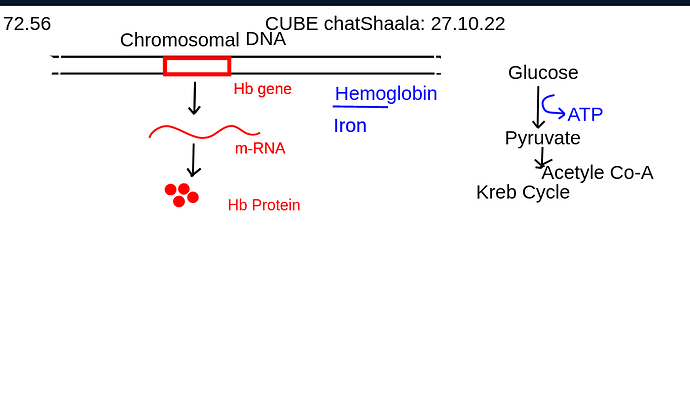 Why did the bottle turned turbid?
Do turbidity have something to do with diffusion of oxygen?
If yes then how?
@jaikishan