ABNORMAL HETEROBLASTIC EXPRESSION IN THE LEAF OF PHYLLANTHUS URINARIA Linn

Plants show diversity among individual members during the ontogeny. Phyllanthus urinaria belongs to the family phyllanthaceae and shows heteroblastic expression in their leaf shape and size. Mainly the changes in plants influence their form and function. The present article deals with abnormal morphological changes observed in leaves of Phyllanthus urinaria Linn. from the juvenile stage to the adult stage. 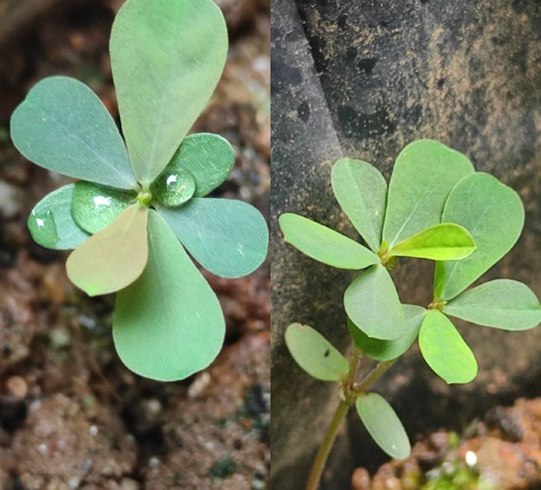 Phyllanthus urinaria is commonly used in herbal medicine and has been described to have several biological features comprising anti-virus, anti-bacterial, and anti-tumor properties. This plant is commonly called chamber bitter, gripe weed, and shatter stone. The term Heteroblastic is introduced by Karl Goebel. Heteroblastic expressions are also reported in Arabidopsis thaliana, Zea mays. It is defined as a crucial and rapid change in form and function that occurs over the lifespan of certain plants. Most commonly in leaf form, leaf size, phyllotaxy, internode length, anthocyanin pigmentation, rooting ability, and wood structure.
In many plants, there is a gradual change from juvenile traits, present soon after germination, to stable adult traits acquired by the time flowering commences. The change in leaf morphology is one of the main features of this heteroblastic development. Leaf shape is the most evident trait that transposes during heteroblastic development. In Phyllanthus urinaria, apart from size changes, there is progressive transformations in leaf shape from node to node. The change in leaf features is one of the main components of this heteroblastic development. The present study involves changes in morphological parameters of leaves of Phyllanthus urinaria. The observable changes in leaf shape and size, the appearance of phyllotaxy, or the arrangement of leaves of seedling and adult plants have been considered for this study. The heteroblastic expression may alter by environmental changes. Here also focus on the abnormal heteroblastic behaviour of Phyllanthus urinaria in comparison with normal heteroblastic behaviour. 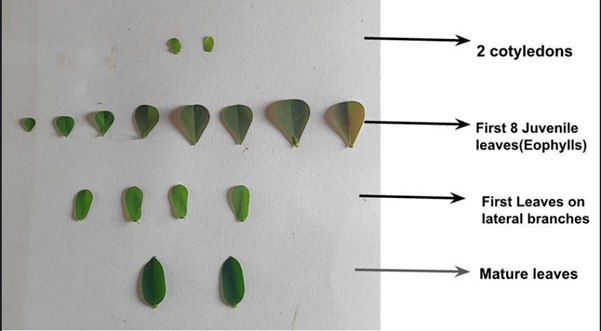 Phyllanthus urinaria shows the transition from juvenile to adult stage in their leaf size and shape. Commonly the leaf has 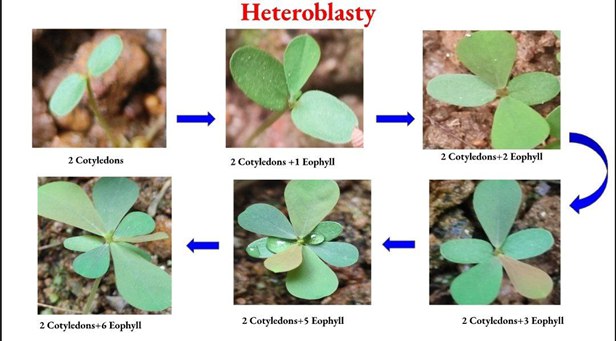 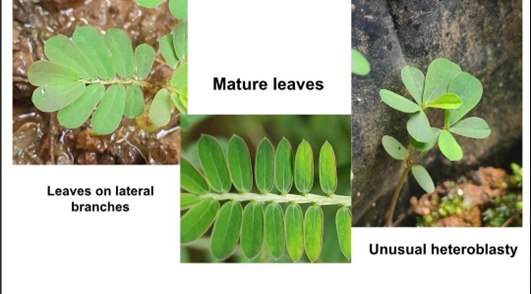 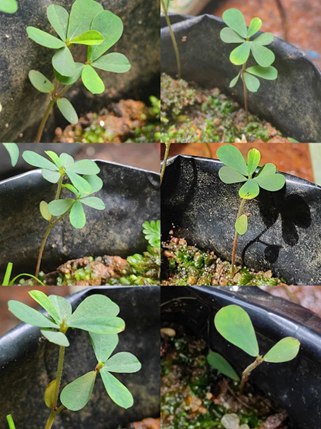 1C
1A and 1B describing the developmental stages of leaves, started from the first embryonic leaf cotyledons , followed by eophylls up to six in number then first leaves on lateral branches and mature leaves. Instead of the usual form of leaves, the last picture shows the development of two sets of eophylls.