Last week reflected on the notion of “agency”. See the post for the summary.

Extending the conversation on “What is being Human?” series, in the last 5 weeks, we will continue our chat live, this Saturday, 2nd Jan 2021, from 3-5 pm at webinar

We started a discussion with @gnowgi Sir Post about the people and discussed lawrence Kauss universe from nothing book. We expanded this idea as small examples and summaries, in which the difference between science and religion was discussed at the Australian National University (ANU) discussion.

Science asks questions on the answer.

Religions are based on their beliefs.

Science always resists and removes the myths of existence and proves the best theory, and this process continues.

Summarizes the difference between science and religion. Religion is the only way to turn its eyes into a belief and reject old beliefs and seek answers to what is happening in the science world.

To go further, we came back in our last week on the subject of multidud, unity and the second concept that was scattered and merged.

So, we discuss 0,1, infinite (population)

The new member, Kanha, explained the need and balance to clearly understand. And explained how the universe is balanced and balanced every time. The system and mirror-like ideas were used to explain and explain their ideas. He gave an example of how when we lift hands to carry out any task, there are many factors that lead to hand lifting, and how the hand lifting process is completed if there is a balance between the factors that cause the hand lifting.

Before that, @gnowgi sir gave an example of a robot - when he needs electricity (food), he comes to the source of light and takes the energy he needs and gets enough energy to go into darkness. And when energy is needed again, the light for energy comes to light and this cycle continues. To take this issue forward, Sir proposed the idea of a stage play called metaxi. If a batsman is batting, he does the energy in the field of the bat and the ball that he turns to hit the ball and kanha adds that it depends on his perspective. The view is to see the play that defines the bowler, the keeper, the stadium and the audience. 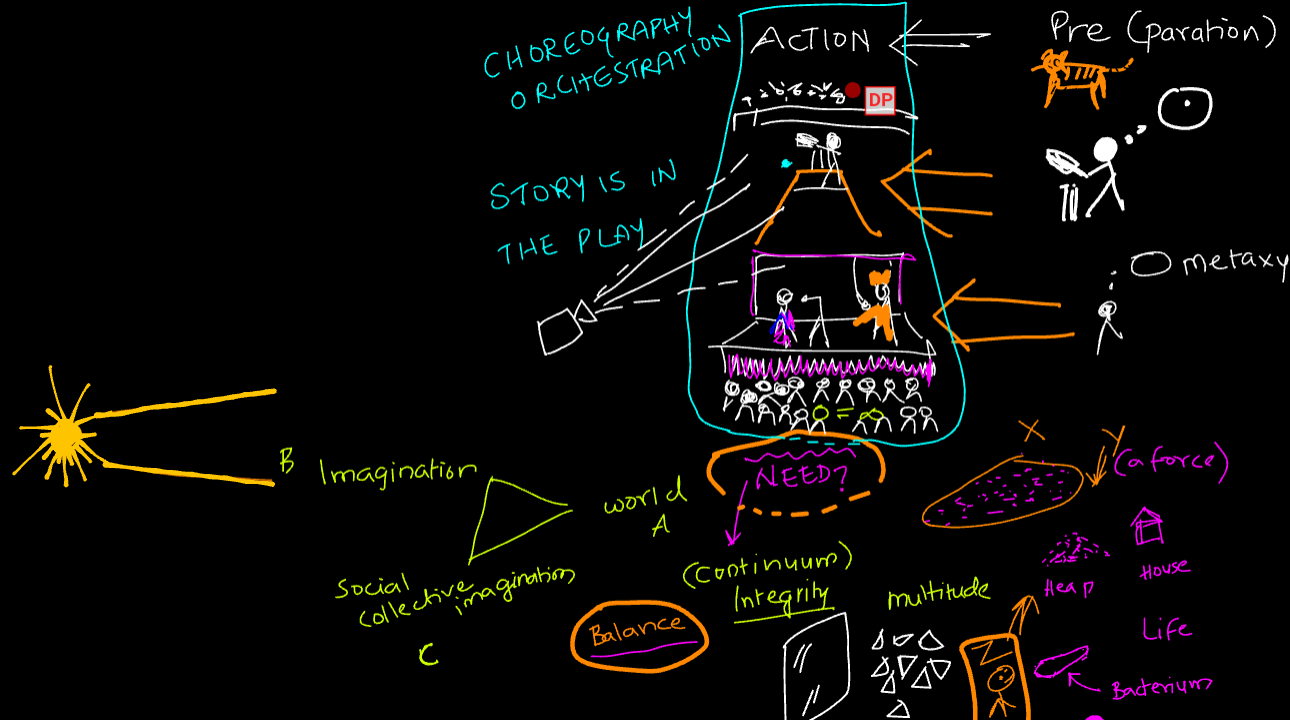 @gnowgi sir came with the preparation part so the bowler of the dance direction organization has done many things before he hit the batsman (prep).

To continue the example of the robot cycle and balance,

I raised the energy universal law in this regard and gave examples in accordance with that cycle.

Energy cannot be produced and destroyed can be converted from one form to another.

Similarly, we have just come and changed in the cycle and when we left this system, it is converted into other energy.

They are references or related documents

The discussion continued on The Barefoot Chat next Saturday.

You can join this Barefoot chat every Saturday at 3 pm.

In this video, we continue the discussion on the origin of creation. Beginning from a multitude perspective, we wondered how do we have integrated entities, have integrated experiences or thoughts. How does the continuum in space as well as time emerge integrating these? And what is the nature of such a continuum? Triggered by the example of a robot and dynamic balance (steady-state or equilibrium), we started reflecting on the role of actions as dynamic relations that an entity has with another entity, thereby defining the boundaries of the entities, and providing integrity. For example, a living organism acquires its physical integrity (unlike a dead organism, though materially it could be the same) by virtue of the dynamic equilibrium that is established and maintained by the actions between the organism and the environment. And this equilibrium provides continuum or integrity to entities, and change in the state of this equilibrium is a natural process as time progresses. We are yet to account for the continuum of our individual as well as collective thoughts and experiences.

Encountered this paper. Could be relevant. Bookmarking it here for future reference. https://www.jstor.org/stable/2781191