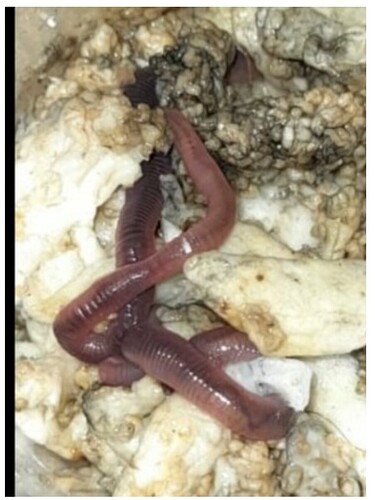 Yesterday the discussion was started with the breaking news from @Arunan sir about Hydra survived without being fed for one month.

we got some connection with earthworm culture of @Misbah ,like* earthworm survived in moist tissue paper for 1 year without changing tissue paper* .

Discussed about earthworm setup ,How the earthworm cupculture was made .was surprised about how these earthworm survived for 1 year without giving external feeds. 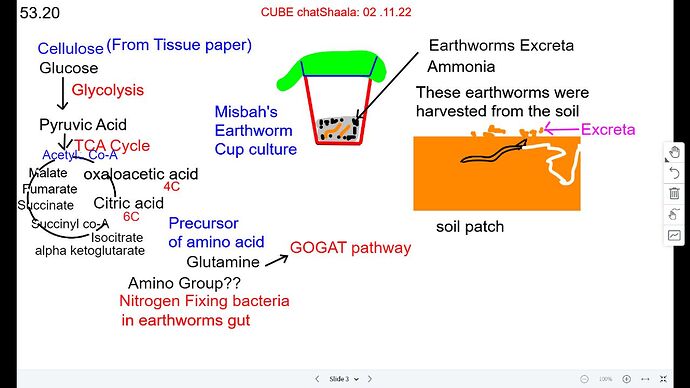 What is the sourse of nutrients gets through tissuepaper !?

Later we discussed about how these source of carbohydrates break down occuring in our body .
Through glycolysis ,Glucose (6C)converts to Pyruvic acids (6C). 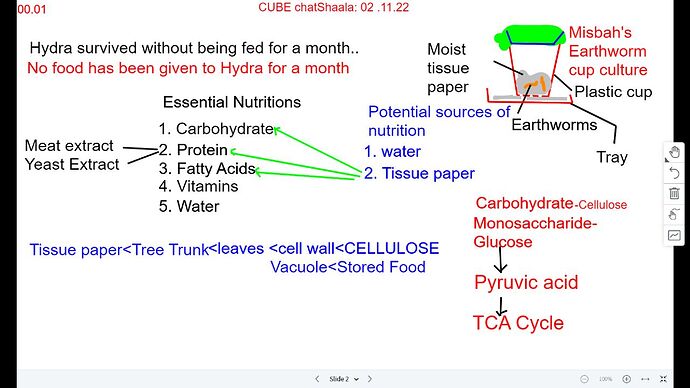 The Devil is in the Details*

The intermediates compounds in TCA cycle serve as a precursor for several aminoacid .
eg:Oxalogutarate on GOGAT pathway give rise to Aminoacids .

Or had comment that there are nitrogen fixing bacterias are present in soli.That could be fixing the atmospheric nitrogen.

Later we came across the hidden devil that we missed in every discussion .

Once @Misbah said that she collected 10 earthworms in the soil ,So in soil earthworm is feeding the soil along with nutrients .

Do earthworm choosy for food !!!

No.They will eat the soil,so there could be a possibility of reaching several bacterias ,Nitrogen compounds ,nutrients etc.

I remember in yesterday’s discussion @Smiti said that the cupculture became dirty after some times .
The reason could be the excreta .Earthworm excreting ammonia .

Also the major thing we missed in every discussion was we forgot about the feeds that present in earthwormgut before puting in to the Cupculture .