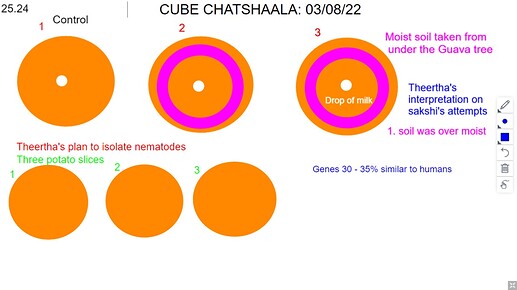 Today we had a wonderful discussion started with @Archita15 from NES Ratnam college. Students from her college were interested in different CUBE Model systems like Nematodes, Moina, hydra, and Phyllanthus, Fruit fly, etc. Then we focused on one of the model that is nematodes.

What is a nematode?

Nematodes are invertebrate roundworms that inhabit marine, freshwater, and terrestrial environments. They comprise the phylum Nematoda (or Nemata) which includes parasites of plants and of animals, including humans, as well as species that feed on bacteria, fungi, algae, and on other nematodes.

So @sakshiconsultant2002 explained about her nematode isolation setup, which sakshi did in her Homelab Bhandup.

@sakshiconsultant2002 made the experimental setup 3 times for culturing Nematodes ,but she didn’t get the nematodes

Then we were discussing about her goof ups!
Like not placing soil properly and making clay out of it and not covering the set up (flies lay eggs on it) 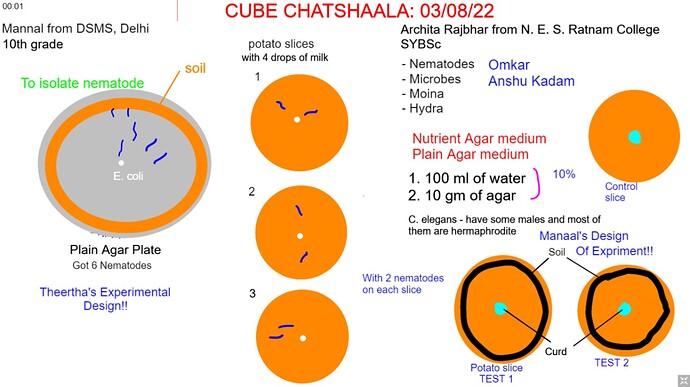 For making agar plate, we can take agar powder, add it to boiling water and stir for a minute.

Then @Theertha made a design where she will use 10g of agar powder in 100 ml of water (i.e 10% of agar silution).
But then we came to know that 2% agar is enough for making plain agar media as sakshi explained.

Can we use potato slices in place of agar?
Yes, many CUBist have been successfully doing this like @magpie and @KiranyadavR

[WhatsApp Image 2021-06-06 at 1.32.01 PM] Aim of the experiment and set up :To isolate nematodes from soil on raw potato surface using two drops of milk at the Centre. Soil from a roadside plant has been taken. The soil is kept moist by adding a drop of water To Isolate and identify nematodes from soil at home lab Kindly click on the given link to find more about this set up

Then we are try to interpret Sakshi’s experiment!!

Then we had A student, Manaal Siddique from DSMS school, Delhi Also made a curious question that "Can we do this experiment in home lab?"

Later Manaal made a experimental setup for isolating nematodes from her home lab!

Today’s discussion was about nematodes and how to isolate them. Sakshi, a cubist shared her experience and Teertha another cubist shared her interpretation on the same. Preparing an experimental setup of two potato pieces with slightly moist soil on the circumference and curd in the middle, I will be trying to isolate nematodes at my home lab.

What is the methodology to observe the nematodes? Can we observe nematodes using mobile camera or some simple technique without need of a sophisticated microscope?

Yes we can observe them using a phone camera!!

What magnification can be achieved from the phone camera?
Which all organisms can be seen with normal phone camera?